AWAITING THE DECISION ON JOINDER OF CASES

The trial of Milan Martic could begin in December 2005 or January 2006, if his indictment is not joined with those of Stanisic, Simatovic and Seselj. In that case, the trial will start later 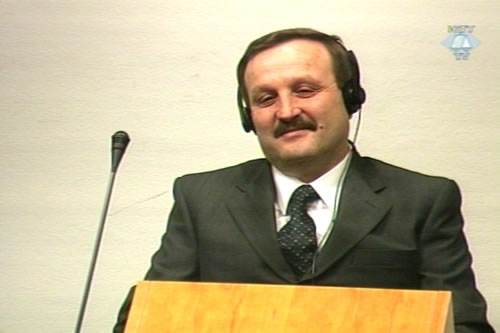 Milan Martic in the courtroom
If Milan Martic is tried alone, his trial could begin in December 2005 or January 2006. However, if his case is joined with the cases against Jovica Stanisic, Frenki Simatovic and Vojislav Seselj, the preparations for trial would “take a little longer,” a pre-trial judge said at the status conference.

Martic is opposed to the joinder of cases proposed by the prosecutor, as are all the other accused. The decision would be made by a special bench of judges.

Martic’s lawyer notes, among other things, that the joinder of cases would further complicate pre-trial preparations. The defense is already “lagging behind”, he said, because the prosecutor keeps disclosing new evidence. The defense team, as the lawyer said, has been forking for the past 17 months without any funds.

Judge Martin Canivel replied several times that he would not be taking into account the arguments of the defense quoting lack of funds, noting that Martic’s defense “has received more than the average for a case in this category and should have managed the funds with greater care.”

The accused Martic took the opportunity at the status conference to ask if he would “break the record” in the length of his wait for the trial. As he said, he is “100 percent innocent, yet he has been detention for three years and four months now”. The judge assured him that the Chamber was doing all it could to get the trial going.

Former interior minister and president of the former Republic of Serbian Krajina has been charged with the shelling of Zagreb in May 1995 and the persecution of the non-Serb population, murder, detention and other crimes committed by the so-called “Martic’s militia” between 1991 and 1995 in Croatia and Bosnia and Herzegovina.