On the third day of his testimony as Slobodan Milosevic's defense witness, Vojislav Seselj testified as if he were a prosecution witness against the absent Vuk Draskovic and the late Zoran Djindjic 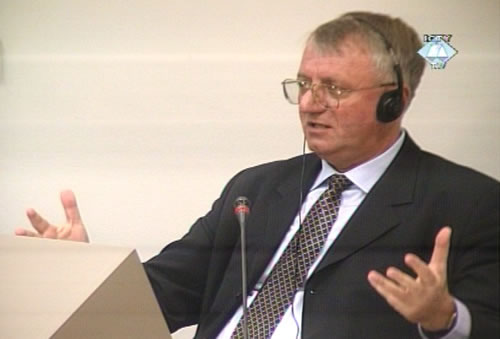 Vojislav Seselj in the courtroom
Vojislav Seselj spent most of his third day of testimony at the trial of Slobodan Milosevic to defend himself, saying a few words here and there in defense of his sometime ideological opponent and coalition partner, and at times he appeared to be testifying as a prosecution witness against the absent Vuk Draskovic and the late Zoran Djindjic.

Seselj himself has been charged with systematic attacks on the Croatian, Muslim and other non-Serb civilians in Eastern and Western Slavonia, Bosnia and Herzegovina and Vojvodina. There are also allegations that he participated in the recruitment, financing, arming, equipping and directing of volunteers associated with the Serbian Radical Party (SRS), who became known as the Chetniks or Seselj's men.

In response to Milosevic's questions, Seselj strenuously denied all such allegations. The SRS volunteers, he said, acted exclusively as part of the JNA and Territorial Defense and were among the "most disciplined and brave" soldiers, and he personally did not have any command or control over them. He said he merely exerted a "political influence" and instructed them to "fight chivalrously on the battlefield and to treat civilians and prisoners-of-war humanely." If any of the volunteers violated those principles, Seselj claims, he was expelled from the army and from the party.

Unlike the SRS, Seselj contends, the other opposition parties had their own paramilitary formations that "plundered and committed war crimes claiming they were doing that to defend the Serb national interests." According to Seselj, the Serbian Renewal Movement (SPO) led the way. The SPO was led by Vuk Draskovic who "expecting armed conflicts to break out in Serbia in the summer of 1990, formed the Serbian Guard, recruiting the worst criminals." Prompted by Milosevic, the witness then read the excerpts from several speeches made by Draskovic in 1990 and 1991, and he labeled them as "war-mongering" and "excessive", even to his standards – the standards of a "confirmed Serb nationalist."

Zoran Djindjic's Democratic Party, according to Seselj, failed to recruit any volunteers because it was made up of "feminized types". But, Djindjic made up for this by his "very close ties with Radovan Karadzic" and with the Panthers – a "gang of robbers" from Bijeljina, led by Ljubisa Savic a/k/a Mauzer, who will later become the president of the Democratic Party in Republika Srpska.

Seselj painted Zeljko Raznatovic Arkan as a "notorious European criminal" and collaborator of the secret police of the former SFRY, who killed political exiles in the West on the orders of the secret police. Seselj says Arkan was always directed by the security service of the Federal Interior Ministry, rather than the Serbian one, which means that Milosevic, as the Serbian president, had nothing to do with him. Seselj pinned the blame for Arkan's murder on Djindjic, as part of the "preparations for the mob-style coup d'etat in October 2000," aimed at "establishing control over the Belgrade underground."

Finally, Seselj accused Djindjic and the government that took over power in October 2000 of "covering up the crimes in Srebrenica". According to him and Milosevic, the crimes were committed by "foreign mercenaries" close to the French secret service. A group of such mercenaries was arrested in 1999 and charged with preparing an attempt on Milosevic's life and participating in the executions in Srebrenica. The then Information Minister Goran Matic from the Radical Party, informed the public of this. Pro-Western parties, Seselj said, ridiculed Matic's claims and as soon as they came into power they released all the accused from jail. Thus, the so-called Spider case never ended up in court.