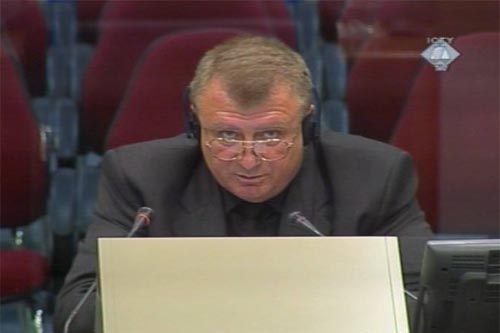 Milorad Davidovic, witness in the Krajisnik trial
Momcilo Krajisnik wants to defend himself; yet, today he proved he didn’t know the legal rule of thumb: never ask a witness any questions you don’t know the answer to. By asking such a question, Krajisnik gave the prosecution witness Milorad Davidovic an opportunity to describe in greater detail how Bosniaks were ethnically cleansed in Bijeljina.

Since in his direct examination Davidovic accused Krajisnik of having issued authorizations for "humane relocation" of Bosniaks from Bijeljina in 1992, Krajisnik tried to challenge this testimony in the cross-examination. He referred to a document entitled, Petition to the International Red Cross which, according to Krajisnik, "shows how Muslims were leaving" – that they were exchanged under the auspices of the International Red Cross. Davidovic says he is familiar with the document and that it shows only that the ethnic cleansing method changed after the response of the international community.

At the beginning of the war, Davidovic said, the Serbian Democratic Party (SDS) "carried out planned and organized ethnic cleansing in the territory of Bijeljina," entering homes, throwing people out, persecuting, abusing and killing them. After this caused a response and condemnation on the part of the international community, they changed their method. Bosniak intellectuals – doctors, teachers, lawyers – were "forced to clean streets, so that an atmosphere is created where all the remaining Bosniaks would see that they were not welcome in Bijeljina any more," Davidovic says. Until the SDS came into power, he was the police chief in Bijeljina. "That's why they signed the petition to go, just to be allowed to go, because they did not want to be taken to the Batkovici camp or to have something even worse happen to them… So pressure was exerted on them again, but in a different way."

Krajisnik's defense counsel Chrissa Loucas tried to impeach Davidovic in her cross-examination, noting that there are several criminal reports pending against him now in Bijeljina, including one for embezzlement, and accused him of "telling lies about Krajisnik to cover up his own misconduct." Davidovic refused to comment her claims.