By controlling the media, the SDS was able to convince the Bosnian Serbs in 1992 that they were at risk of a genocide – "in such a situation, any means to defend oneself was justified," says British journalist and author Mark Thompson at the trial of Momcilo Krajisnik 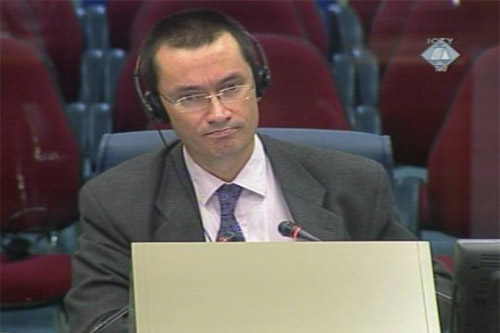 Mark Thomspon, witness in the Krajisnik trial
The Serbian Democratic Party (SDS) successfully established its control over the media in its territories in early 1992 and used them to instill fear among the Bosnian Serbs that they would be exterminated and to convince them that Croats and Bosniaks had genocidal aspirations, British journalist Mark Thompson said at the trial of former high-ranking SDS member Momcilo Krajisnik. "There were efforts to blur the difference between fear of becoming a minority and fear of extermination," the witness noted.

Thompson, who authored the book Forging the war – media in BH, Serbia and Croatia, adds that in that period not only did the media in Republika Srpska fail to act as the watchdog of democracy, but were used to cover up the information that were not in line with the views taken by the SDS. In his report, the witness appended a number of statements Krajisnik made in that period that were "in line with the pattern of the media speak." Thompson spent the nineties in the former Yugoslavia reporting for the Guardian and investigating the issues he later wrote about in his books.

Krajisnik's lawyer put it to the witness that with the war looming ahead, is not unusual to threaten an enemy in order to deter him from engaging in a conflict and to issue exaggerated warnings to your own people. Thompson replied that what was said in the SDS-controlled media did not represent exaggerated warnings, but made-up threats of the most serious nature – to the effect that there is a specter of genocide hanging over the Serbs. “In such a situation, any means of self-defense becomes justified", witness said.

“The media were supposed to question such serious political statements, yet they failed to do so," Thompson concluded. When the lawyer asked who was responsible for that, the witness concluded that the people in the media were to blame, as were the politicians that controlled them.

In his cross-examination of the witness, Krajisnik put stress on two interviews he had given to Glas srpski in late 1992, in which he said he would "fight any attempt to carry out ethnic cleansing." This did not change Thompson's views. "Such a statement could not have convince Bosniaks and Croats that they had any future in the Serb-controlled territory. The discrepancy between this statement and the situation in the field was grotesque," the witness noted.