FROM PARTIAL TO FULL TRUTH

After first telling the investigators "partial truth" about the events in Lapusnik in the summer of 1998, Dr. Zeqir Gashi changed his mind and recounted everything he knew, since the truth "comes to the surface sooner or later, anyway" 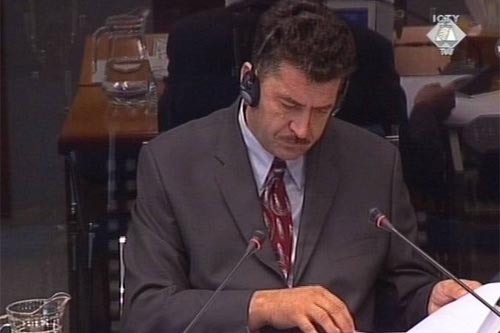 Zecir Gasi, witness in the KLA trial
When he met the investigators from The Hague the first time in September 2003, Zeqir Gashi told only partly the truth, and in part, not the truth, because he did not want to be a witness at this trial, as he admitted today. Half a year later, he changed his mind, because he realized that the truth "comes to the surface sooner or later, anyway." At his second meeting with the investigators, in February 2004, he told them all he knew about the three former KLA members charged with the crimes in the Lapusnik camp. What he knows more or less conforms to what the prosecution alleges about their roles.

Zeqir Gashi graduated from medical school in 1994 at the "parallel university" in Pristina, and then opened a private clinic in his home village of Lapusnik in Kosovo. In early June 1998, he set up a makeshift infirmary in a house in the southern part of Lapusnik, at the initiative of the local KLA commanders. The infirmary served civilians and soldiers.

In less than two months of its existence, Gashi met all three of the accused. He described the first accused, Fatmir Limaj, a/k/a Commander Çeliku, as a "young and brave KLA commander in Klecka", but he did not know what his area of responsibility was. The commander of the Çeliku unit, stationed in Lapusnik itself, was Isak Musliu, a/k/a Qerqizi. He would procure medicines for the infirmary, according to the list drawn up by Dr. Gashi. Finally, the witness would see his old acquaintance, Haradin Bala, in Lapusnik too. According to the indictment, he was a guard in the prison in which KLA members detained and abused, as alleged in the incitement, the kidnapped Serbs and the Albanians they had accused of collaborating with the Serbs. In the initial interview with the investigators, when he "spoke the truth only in part", Gashi said that he did not know Bala and that he had not seen him in Lapusnik.

Although he took his meals together with the soldiers in a building opposite the compound where the camp was, as alleged in the indictment, Dr. Gashi claims he did not see the prison and did not hear about it either.

He left Lapusnik on 25 July 1998, when the offensive of the Serbian security forces began. According to the indictment, that is when the camp itself was evacuated and when the remaining 20 or so prisoners were taken to the Berisha mountains, where half of them were set free and the other half was executed.

Zeqir Gashi left Kosovo in the spring of 1999 and now lives "in a third country" where he has a "different job", as he awaits the license to practice the profession he had studied at the "parallel university" in Pristina.