FINAL JUDGMENT FOR KORDIC AND CERKEZ

“Based on the entirety of direct and circumstantial evidence, a reasonable trier of fact could have concluded that for Kordic this attack on Ahmici and other Lasva Valley villages was aimed at ethnically cleansing the area for strategic reasons,” the Appeals Chamber noted in its judgment. Most of the charges against Mario Cerkez were dismissed, with the exception of unlawful detention of Bosniaks in the Vitez cinema and SDK building in 1993 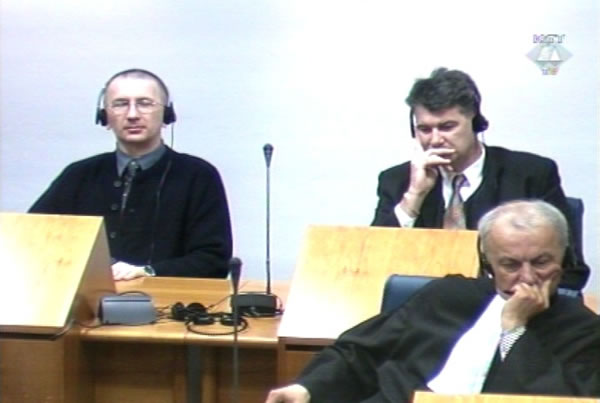 Dario Kordic and Mario Cerkez in the courtroom
The Appeals Chamber of the Tribunal confirmed today the findings of the Trial Chamber that Dario Kordic “as a high-ranking politician [in central Bosnia] participated in the planning of the military operation and attack on the village of Ahmici” and confirmed the sentence imposed by the Trial Chamber – twenty-five years in prison for the former Vice-President of Herceg-Bosna.

In the same judgment, the Appeals Chamber reduced the sentence imposed on his co-accused, Mario Cerkez, former commander of the HVO Vitez Brigade, from fifteen to six years in prison. He was found guilty of unlawful detention of Bosniaks in the cinema and SDK buildings in Vitez in April 1993. As the Appeals Chamber concluded, he thus “manifested the intent to systematically discriminate” another ethnic group, which amounts to the crime of persecution. In the first-instance proceedings, Cerkez was acquitted of the charges for the crime in Ahmici, and in the appellate proceedings he was acquitted of the charges for the attacks on civilians in Donja Veceriska and Stari Vitez in April 1993, since it was not supported by evidence that he had taken part in those actions with the intent of committing crimes.

When deliberating on appropriate sentences, on 2 December, the judges concluded that Cerkez’s sentence would be shorter than the time he had spent in detention and ordered his immediate and final release, which was executed the next day. Cerkez did not avail himself of the right to return to The Hague to attend the delivery of the judgment.

Dario Kordic was acquitted of the crimes committed in a limited number of locations, for instance in Novi Travnik, but most of the other convictions were confirmed, including the most serious crime in the indictment – the attack on Ahmici on 16 April 1993. He was found guilty of instigating and ordering the systematic attacks on civilians and unlawful detention in a number of other towns and villages in Central Bosnia, including Busovaca and the Kiseljak area.

“Based on the entirety of direct and circumstantial evidence, a reasonable trier of fact could have concluded that for Kordic this attack on Ahmici and other Lasva Valley villages was aimed at ethnically cleansing the area for strategic reasons,” the Appeals Chamber notes, adding that the accused did have “direct intent” to commit the crimes. He “approved the general plan” knowing that Bosniak men of military age would be killed, civilians expelled, and their homes destroyed, the summary of the judgment states.

On the basis of Kordic’s “strong nationalist and ethnic stance, and his desire to attain the sovereign Croatian state within the territory of Bosnia and Herzegovina at any cost", he “possessed the specific intent to discriminate which is required for the crime of persecutions“, Presiding Judge of the Appeals Chamber, Wolfgang Schomburg read out.

The judge stressed that the International Tribunal has never had and will never have the opportunity to hear cases against all the persons allegedly being among the most responsible for the events in Lasva Valley. As a result, the Tribunal can only carefully analyze the question of individual criminal responsibility of persons accused before it. Schomburg also noted that an acquittal does not mean that a crime was not committed, but merely that the criminal responsibility of an individual accused has not been proven for that crime.

Dario Kordic has spent seven years and three months in the UN Detention Unit and this time will be credited to his sentence.