The defense of Mario Cerkez, former commander of the HVO Vitez Brigade, claims that there are "no firm foundations" for the conclusion reached in the first-instance judgment that the accused was a participant in a "criminal plan" to attack Bosniaks in the Lasva Valley. 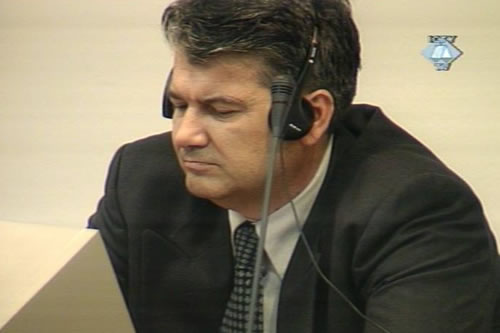 Mario Cerkez in the courtroom
The defense of Mario Cerkez, former commander of the HVO Vitez Brigade, claims there are "no firm foundations" for the conclusion reached in the first-instance judgment that the accused was a participant in a "criminal plan" to attack Bosniaks in the Lasva Valley. The arguments were presented at the appeals hearing in the case of Dario Kordic and Mario Cerkez. They both appealed the Trial Chamber’s February 2001 judgment, as did the prosecution.

The Trial Chamber decided that Cerkez had been informed of the intention to commit the crimes at a meeting in Tihomir Blaskic's headquarters, and that he had participated in their commission through attacks launched on 16 April 1993 in Vitez, Stari Vitez and Donja Veceriska. He was sentenced to 15 years in prison for his brigade’s actions at these locations but was acquitted of the massacre in Ahmici, committed by HVO Military Police.

Based on the testimony of protected witness AT, former member of the HVO Military Police and himself an accused in another case before the Tribunal, the Trial Chamber decided that Cerkez had been present at the military meeting on 15 April 1993 when the orders to launch an HVO attack on Ahmici and other villages in the Lasva Valley were issued.

The defense, however, claims that Cerkez was not at that meeting and there is "no evidence" that orders to commit crimes were issued there. Defense counsel Bozo Kovacevic warns that AT's evidence is in fact hearsay, and that the defense has "more credible" evidence that Cerkez was not present at the meeting in Blaskic's headquarters at all. "Even if he had been there, he would not have learned about the criminal plan because it did not exist at the time," says Kovacevic, adding, "Witness AT himself says that he heard about the orders to kill people in Ahmici for the first time that night, at the meeting of the military police." The defense concludes there is no evidence that would prove beyond a reasonable doubt the judgment’s finding that Cerkez was aware of his participation in a criminal plan.

In its appeal, the defense further notes that Cerkez's right to a fair trial was violated because the defense was given insufficient time to prepare for closing arguments and the testimony of the accused at trial while the prosecution "kept introducing new evidence." The defense further states that the Trial Chamber erred when it qualified the conflict in the Lasva Valley as international. It wants the Appeals Chamber to revise this finding and quash Cerkez’s convictions for breaches of the Geneva Conventions.