At his initial appearance before the Tribunal, Beqa Beqaj pleads not guilty to all counts of the indictment charging him with contempt of court. Judge orders he be remanded in detention 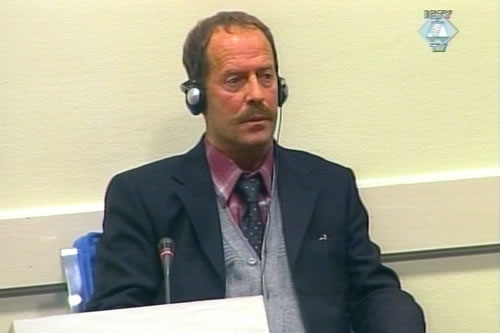 Beqa Beqaj in the courtroom
“I said already in Pristina that you arrested and brought to The Hague an innocent man,” Kosovo Albanian Beqa Beqaj stated this morning at his initial appearance before the Tribunal. He is charged with the intimidation and blackmail of potential prosecution witnesses due to appear at the upcoming trial of three former KLA members, indicted for crimes against Serb and Albanian detainees in the Lapusnik camp.

Beqaj was arrested last week in Kosovo by UN police pursuant to a 21 October OTP indictment. He is charged with having tried to influence two potential prosecution witnesses--Rexha Rexhaj and Rizah Rexhaj--using a variety of methods: threats, blackmail, attempted bribes. Beqaj allegedly tried to get the witnesses to recant their statements accusing Fatmir Limaj and Isak Musliu, former KLA members whose trial is set to begin on 15 November. The indictment’s three counts charge Beqaj with contempt of court, attempted contempt of court, or incitement to contempt of court.

After the accused pleaded not guilty to all the charges, Judge Alphons Orie ordered that he remain in the UN Detention Unit until further notice.

Defense counsel Rodney Dickson, who represented Beqaj at today’s hearing, indicated he would be filing a motion for provisional release as soon as prosecutors disclose their supporting material to him. This material was reviewed together with the indictment and served as the basis for its confirmation.

The defense objected to the conditions of detention ordered for Beqaj, but at the request of the prosecution, this issue – “because of the nature of the order” defining the conditions – was discussed in private session.