FOR KARNAVAS, ATTACK IS THE BEST DEFENSE

The defense counsel for Vidoje Blagojevic, charged with the massacres in Srebrenica in the summer of 1995, calls for his client to be acquitted. In his closing argument, Karnavas levels severe accusations against the prosecution. 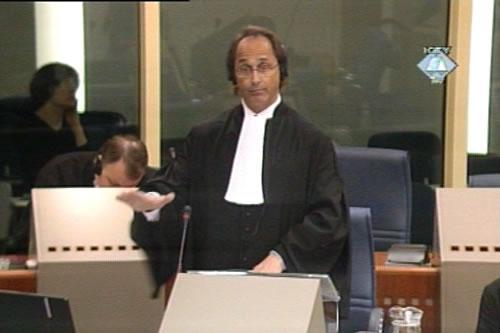 Michael Karnavas, defence attorney of Vidoje Blagojevic
“Vidoje Blagojevic did not participate in the joint criminal enterprise in Srebrenica in 1995, nor did he participate in any of the crimes the prosecution has charged him with," Michael Karnavas stated in his closing argument. His client is the former commander of the VRS Bratunac Brigade, charged with complicity in genocide, crimes against humanity and violations of the laws and customs of war in Srebrenica in the summer of 1995.

The defense is calling for Blagojevic’s acquittal. Karnavas began his closing argument with a severe criticism of prosecutors, accusing them of basing their conclusions about the guilt of the accused on "a pre-fabricated construction," not on facts. "They have rejected all evidence not supporting this construction and accepted uncritically all the evidence that tended to support it," Karnavas said.

Presiding Judge Liu Daquin intervened at that point, warning the American lawyer to focus his comments on the "evidence presented in the course of the trial, not the methodology used by the prosecution."

Blagojevic's defense counsel called upon the Trial Chamber to dismiss the counts charging his client with complicity in genocide, challenging the legal interpretation of the crime offered by the prosecution. He claims that in order to prove complicity in this act, it is necessary to prove "the intent of the accused to destroy, in part or in whole, an ethnic or religious group," while the prosecution contends that the mere "knowledge of genocidal intent" on the part of those who planned and ordered the crime in which the accused participated is sufficient.

The American lawyer used a similar approach to challenge prosecutors’ claims that Blagojevic was a participant in a joint criminal enterprise. "It is a doctrine that came in from nowhere," Karnavas said, going on to explain that the term "joint criminal enterprise" was mentioned for the first time in the Tadic case; in his opinion, however, it is "not based on the Tribunal Statute."

Karnavas claims that the prosecution based its evidence on statements made by the accused who pleaded guilty for the same crime and made a deal with prosecutors. Blagojevic's lawyer stated that the testimony of Momir Nikolic, who was in charge of security in the Bratunac Brigade and sentenced to 27 years in prison after his guilty plea, "was unreliable at the least."

"This is a man who admitted here that he had lied to the prosecution in an effort to make a deal with them," Karnavas stressed, saying that in his testimony, Nikolic "said things that the prosecution had given him, i.e., those things that were in their favor."

In one of several objections he made during the defense’s closing argument, prosecutor Peter McCloskey stated that Michael Karnavas's speech "was not a defense of his client, but an attack on the prosecution." The presiding judge appealed once again to the defense counsel to "leave out extraneous comments – sometimes quite personal – aimed at the other side." There were, however, several similar situations.