JUDGEMENT IN BLASKIC CASE DUE ON 29 JULY

The longest proceedings before the Tribunal so far will be concluded on 29 July, when the Appeals Chamber is set to deliver its judgment. The former HVO commander in Central Bosnia has been in the UN Detention Unit for more than eight years. He is charged with the persecution of Bosniaks in the zone under his command in 1992 and 1993 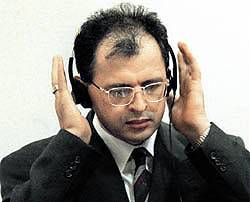 Tihomir Blaškic in the courtroom
The Appeals Chamber of the Tribunal will deliver a final judgment in the case of General Tihomir Blaskic on Thursday, 29 July, thus concluding the longest proceedings before the Tribunal to date.

The former HVO commander in Central Bosnia has been in the UN Detention Unit for more than eight years. He surrendered to the Tribunal on 1 April 1996, five months after the indictment against him had been issued, charging him with the persecution of the Bosniak population in the zone under his command during the Croat-Bosniak conflict in 1992-1994. The presentation of evidence began in June 1997 and was completed in July 1999.

In March 2000, the Trial Chamber, with Judge Claude Jorda presiding, found Blaskic guilty on all counts of the indictment, including the massacre in the village of Ahmici, sentencing him to 45 years in prison. The accused lodged an appeal the same month. The prosecution did not appeal.

The appeal took a long time to prepare – three and a half years. In that period, Blaskic's defense tendered into evidence a large number of documents which it argued it did not have at its disposal during the trial. The Appeals Chamber agreed to consider some of the new defense evidence. For a time in 2002, it even considered re-trying parts of the case, having assessed that the new evidence may render some of the findings of the Trial Chamber unsafe.

The possibility of retrial was rejected, and Blaskic's case was considered within the usual appellate proceedings. Oral arguments were presented during two weeks of appellate hearings last December. Having presented additional evidence to prove that Blaskic had no effective control over the units that committed the crimes, the defense sought that the first instance judgment be quashed. The prosecution, in its reply, urged the judges not to ignore the fact that the accused was the highest-ranking commander in Central Bosnia.