A report explaining the factors that led to internal conflicts among Kosovo Albanians in the 1990’s has been tendered as supporting material for the charges against former Kosovo Liberation Army members accused of crimes against Serbs and Albanians. 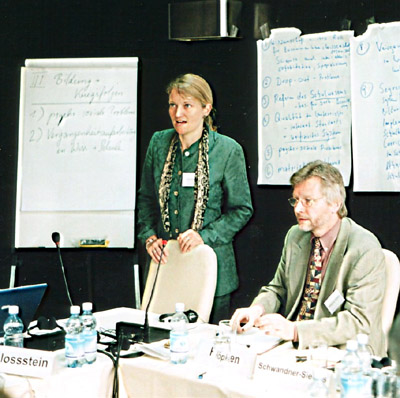 Stephanie Schwander-Sievers, witness at the Limaj et al. trial
The prosecution tendered an anthropological report as supporting material for charges against former Kosovo Liberation Army members accused of the abuse and murder of Serbs and Albanians in 1998. The report explains the historical and cultural factors leading to internal violence among Kosovo Albanians.

“Together with Serb civilians, Albanian civilians who were perceived by the KLA as refusing to co-operate […] were targeted for imprisonment, violence, and murder," states the indictment against Fatmir Limaj, Haradin Bala and Isak Musliu. Prosecutors maintain that Serbs and Albanians from the areas of Stimlje, Glogovac and Lipljani were held in detention in 1998 in the Lapusnik camp, where they were killed, tortured and beaten. A group of detainees was killed on the Berisa Mountain after the camp was closed. The names of 10 Serb and 12 Kosovo Albanian victoms are listed in the indictment.

Anthropologist Stephanie Schwander-Sievers, a professor of Albanian studies, says in her report that there were internal conflicts among Kosovo Albanians, both in the community and among the groups advocating the military option. These conflicts “cannot be understood if one does not take into account the wider historical context of the Serb-Albanian conflict" or processes such as ethnic segregation in Kosovo, economic exclusion, growing nationalism and ethnic violence that culminated in the abolishment of Kosovo's autonomy.

Schwander explains the importance of traditional cultural concepts in the Albanian society, such as feuding and reconciliation, with correlated concepts of besa (given word or promise of loyalty), blood, sacrifice, martyrdom and betrayal. These traditional, rural concepts were "instrumentalized in the struggle against Serbs" in the ‘90s, the report states.

In 1998, “the traditional or ‘Enverist’” option gained popularity and control in society; it was represented by the KLA, she explained. "In early 1998, the number of attacks both on the Serb police and the Albanian 'collaborators' increased." In Schwander's opinion, if the values in a society range from "honor" on one end to "betrayal" on the other, one can expect the expulsion or murder of those who are considered as "traitors" to be accepted as logical. She adds, however, that sometimes these traditionalist concepts were used to conceal the motives for murders of political or other natures.

There were divisions among Kosovo Albanians in many areas. First, the traditionalist war option prevailed over the pacifist option advocated by Ibrahim Rugova and the option of ‘professional’ defense system advocated by the head of the government in exile, Bujar Bukosi, because these two options were proven to be unsuccessful after Dayton, Schwander states. “The enormous success of the previously marginal militant groups would not have been possible without Serbian nationalism, inter-ethnic apartheid and the violent excesses of Serbian state forces," she adds.

The second division was economic and socio-cultural in nature, the report states. "The Kosovo Albanian society was divided into rural and urban, traditionalist and modern, religious and clannish," resulting in the development of differing views on how to govern and wage war.

Finally, "violent conflicts among local Kosovo Albanians may often simply have been the result of clashing businesses or clan and power interests under political headings," Schwander states.

According to the author, there was a dramatic factor that affected all segments of Kosovo Albanian society the same: "Their 'governments' or 'armies' were not rooted in an established nation-state," and "existing parallel formations had no executive power, nor any political legitimacy or rule of law that was backed up international recognition." She believes that because of this, the society was much more susceptible to "initiatives of tribal 'jacks-of-all-trades'."