PROSECUTION CALLS FOR STIFFER SENTENCES FOR KORDIC AND CERKEZ

In Dario Kordic and Mario Cerkez’s appeals hearing, the prosecution claims the penalties imposed on both men are "inappropriate" and should be increased. In Cerkez's case, the prosecution wants him found guilty of the crime in Ahmici. 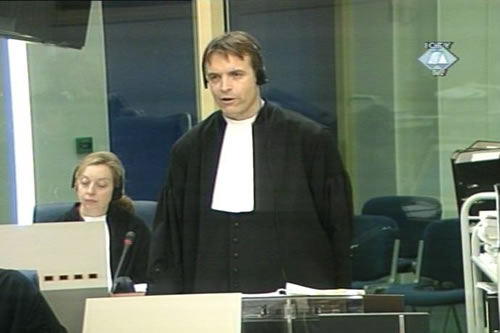 Procecutor at the Mario Cerkez trial
Prosecutors presented their arguments today at the appeals hearing of Dario Kordic and Mario Cerkez, calling for stiffer sentences for the accused.

Prosecutors say the 25-year prison sentence for Kordic, former Bosnian Croat political leader in Central Bosnia, is "manifestly inappropriate" since it "does not reflect the severity of the acts he is charged with and his role therein." In their appeal, they are not seeking that Kordic be found guilty of crimes he was acquitted of by the Trial Chamber, but rather are calling for an "appropriate punishment" for the crimes he was convicted of, including the persecution of Bosniaks in the municipalities of Busovaca and Vitez and the massacre in Ahmici.
As prosecutor Helen Brady said, it has been proven that Kordic, as an influential politician, "instigated and planned" the crimes and had authority over the military, although he was not formally part of the chain of command. "A perpetrator in white gloves perhaps deserves a more severe punishment than those who committed the crimes," Brady said.

Kordic's sentence was substantially lighter than the 45-year sentence imposed on Tihomir Blaskic, military commander of the HVO in Central Bosnia. The prosecution points out they were charged with "very similar crimes" and "there shouldn't be substantial inconsistencies in punishing two offenders when circumstances are similar, especially not where the trial chamber has found the relationship between Kordic and Blaskic to be joint authorities, even that Kordic was above Blaskic."

In the case of the former commander of the Vitez Brigade, Mario Cerkez, the prosecution is calling for a more sever sentence. In its view, 15 years in prison is "not appropriate" in light of the "important role he played in the campaign of persecution” against Bosniaks in the Vitez area. Furthermore, prosecutor Norman Farrell claims that the Trial Chamber erred when it acquitted Cerkez of the Ahmici crime.

Although the Vitez Brigade did not take part in the "initial attack" on the village when more than 100 Bosniaks were killed and their houses burned, the prosecution deems that Cerkez "took part in the joint criminal enterprise which comprised the massacre through various steps taken by his brigade." The prosecution claims that actions launched by the HVO on 16 April 1993 were "coordinated" and concludes that the commander of the Vitez Brigade was responsible for all events in his zone.

At the end of three days of hearings, the accused were given a chance to speak. Kordic did not take the opportunity. Cerkez did, and said, "I want to express my sincere and deep remorse for every victim in the Lasva valley." He accepts responsibility for things that happened in the locations where "soldiers under his command operated," but claims that Ahmici were not such a location. "As a Croat from Bosnia and a member of the HVO, I am hurt and ashamed by the fact that in the Lasva Valley area, the HVO is responsible for several crimes – primarily the crime in Ahmici," Cerkez said. He added that he surrendered voluntarily to the Tribunal because he "supports the idea that led to the founding of this honorable court" and the "efforts to bring to justice individuals who committed the crimes, to relieve the people of the burden of collective guilt."

The Appeals Chamber then withdrew to deliberate, a process that is expected to last several months.