SERBIA AND MONTENEGRO TO CONTINUE ITS LITIGATION AGAINST NATO

A hearing on the jurisdiction and admissibility of an April 1999 Applications filed by the former Federal Republic of Yugoslavia against NATO members begins tomorrow before the supreme world court. 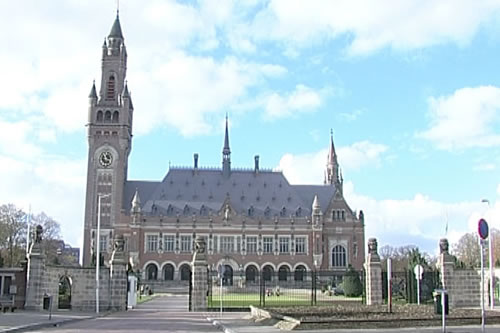 ICJ Headquarter in Den Haag
Five years after the former Federal Republic of Yugoslavia filed its Applications against ten NATO member states, hearings to determine whether the highest legal body of the UN indeed has the jurisdiction to hear the merits of the case will begin before the International Court of Justice (ICJ). The hearings will last one week. The merits of the case, as defined by Belgrade in April 1999, are that NATO resorted to the "illegal use of force" against the FRY and in the process, violated the Convention on the Prevention and Punishment of the Crime of Genocide. In other words, according to the FRY applications, NATO committed genocide and should pay reparations to Serbia and Montenegro.

In early June 1999, the ICJ rejected a motion filed by Belgrade seeking a "provisional measures" ordering NATO member states to immediately cease air strikes against the FRY. At the same time, the Court declared that it "manifestly lacked jurisdiction" in the cases of the FRY vs. the USA and the FRY vs. Spain. Those two countries, when they ratified the Convention on Genocide, made a reservation regarding the "automatic jurisdiction" of the ICJ in disputes on the application of the Convention.

Since the Court decided in the other eight cases (FRY vs. Belgium, Canada, France, Germany, Italy, the Netherlands, Portugal and the United Kingdom) that it had no "prima facie" jurisdiction, it suspended the proceedings on the merits until the jurisdiction issue is resolved.

Five years of written procedure ensued. The parties exchanged arguments about the jurisdiction of the ICJ and the admissibility of the cases. Oral arguments will be heard next week about these issues in The Hague. On Monday and Tuesday, the eight NATO members "in the dock" will present their arguments as to why they think the ICJ lacks jurisdiction in this cases and why they are not admissible. On Wednesday, the legal representatives of Serbia and Montenegro will explain why they think the opposite. On the last two days of hearings, Thursday and Friday, the sides will get a chance for another round of arguments.

Whether the actual merits of the case - the legality of the use of force by NATO against the FRY in 1999 - will ever be discussed depends not only on the ICJ's ruling on the jurisdiction and admissibility issues, but also on the political decisions of Belgrade. Belgrade has been told that if it wants to join the Partnership for Peace program, it will have to give up further litigation against NATO. But that it is not an urgent issue at this time, since some other prerequisites for Serbia and Montenegro association with the Euro-Atlantic community have not been met - primarily cooperation with the Tribunal and the arrest of Ratko Mladic, believed to be in Serbia.

There is, however, another reason why Belgrade continues its litigation against NATO. Belgrade would like to see it dealt with in a "package" with the ICJ cases against the FRY initiated by Bosnia and Herzegovina and Croatia. Those two countries demand that the ICJ find the former FRY (now Serbia and Montenegro) guilty of genocide and order it to pay war reparations. Belgrade would gladly relinquish its eight cases against NATO if BH and Croatia would drop their cases against the FRY. NATO probably would not mind, but for the time being, BH and Croatia see no reason why they should join this "package deal."

The litigation will therefore continue.