“DISCOUNT” FOR GUILTY PLEA AND REPENTANCE

Will the sentence imposed on Admiral Miodrag Jokic revive the interest of the accused – especially those of high military ranks – for entering a guilty plea and cooperation with the prosecution? 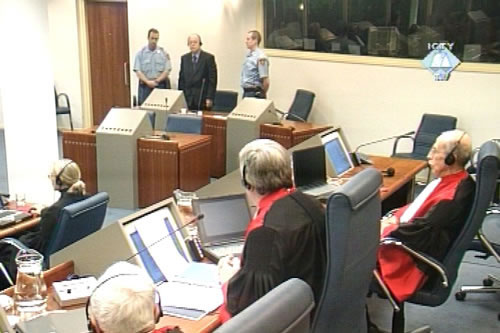 Miodrag Jokic in the courtroom
The seven-year prison sentence imposed yesterday to Admiral Miodrag Jokic is the mildest punishment that the Tribunal has so far imposed on a high ranking officer in the armies involved in fighting in the former Yugoslavia. Generals Radislav Krstic (sentenced to 46 years), Tihomir Blaskic (45 years) and Stanislav Galic (20 years) have felt on their own skin that the judges think that a high rank entails a high degree of responsibility and the proportionally severe punishment.

There are two reasons why the first vice admiral to be convicted by the Tribunal has fared so much better than the generals convicted so far. The first is that the judges have found that his participation in the crime of which he was accused – shelling of the Old Dubrovnik in December 1991 – was " peripheral and was mostly effected through omissions". The second, much more important reason is that a number of mitigating circumstances tipped the balance in Jokic's favour, primarily his guilty plea, active cooperation with the prosecution and his remorse for what he had done, or rather failed to do. The judges found him guilty of failing to prevent or punish the shelling.

In the early days of the Tribunal, when everyone pleaded not guilty as a rule and guilty pleas were a very rare exceptions, prosecutors always stressed that the accused who plead guilty and cooperate with the prosecution in the process of the determination of truth about the events in the former Yugoslavia could count on getting "a substantial discount" in their punishment. On one occasion it was stated publicly that the "discount" may be between "50 and 75 percent" of the sentence the accused would get if he were found guilty. Of course, the imposition of the actual sentence is exclusively in the purview of the judges, but so far they have imposed sentences within the range proposed by the prosecution, with very few exceptions.

From Drazen Erdemovic in May 1996 to Milan Babic last December, seventeen accused have pleaded guilty. Three of them (Darko Mrdja, Miroslav Deronjic and Milan Babic) have yet to be sentenced, and the remaining 14 were sentenced to a total of 194 years in prison, the individual sentences ranging from 3 to 40 years. The average sentence imposed on a "penitent" is slightly over thirteen years, about four years less than the overall average sentence for the forty-odd persons convicted so far by the Tribunal.

The mildest punishment, only three years in prison, was imposed on Dragan Kolundzija, former leader of a guard shift in the Keraterm camp; the severest punishment – forty years – was imposed on Goran Jelisic, who pleaded guilty to 14 murders committed in May 1992 in Brcko. In his case, the guilty plea was not taken as a mitigating circumstances, since the accused, as the judges concluded, "pleaded guilty to something that was easily proven." Some of his murders were "preserved for posterity" on photographs published all over the world. Furthermore, Jelisic did not cooperate with the investigators; it was noted that he offered them a "sanitized version" of the events in Brcko and he did not show remorse for the crimes he had committed.

If the sentences imposed on Momir and Dragan Nikolic caused the accused to lose their trust in the "substantial discount" offered to them by the prosecution in exchange for their guilty plea and cooperation, the sentence imposed on Admiral Jokic – three years less than what the prosecution requested – might revive the interest for plea agreements in the UN Detention Unit. Especially among the twenty-odd generals from all the armies involved in the conflict who are awaiting trial and who can compare how Jokic fared with the fate of generals Krstic, Blaskic and Galic.