How the municipal maps in Bosnia and Herzegovina were drawn on the basis of ethnic structure and land ownership. 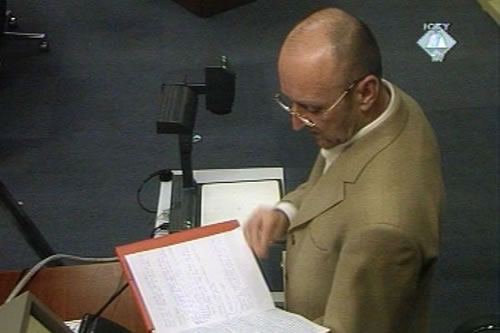 Miroslav Deronjic
"I have a problem understanding how the maps, based on the ethnic structure of the population and land ownership in Bosnia, were made," Presiding Judge Alphonsus Orie admitted in the course of the cross-examination of Miroslav Deronjic, a prosecution witness at the trial of Momcilo Krajisnik. Trying to grasp the concept, he asked the witness whether "the maps indicating land ownership were supposed to be as valid an argument as the ones showing the ethnic groups which were in the majority in parts of Bosnia?"

Deronjic first said that he was afraid he would "probably make things even more complicated" in his desire to assist the court. He then explained that in the discussions about "this quite strange question who Bosnia really belonged to," the SDA always stressed the importance of the demography, i.e., the population figures (where Muslims were in the majority); the SDS always invoked history and (Serbian) ownership of land; while Croats mostly used historical arguments, claiming that "(Croat) rulers had ruled Bosnia in some periods in its history.” As Deronjic said, in the early nineties these were the usual arguments offered by the three opposing sides. "It looks strange today, but the highest representatives of the political parties in BH engaged in such discussions publicly and in the media," he concluded.

Judge Orie did not say whether the answer helped him to understand "whose Bosnia was" and why the municipal maps had been drawn on the eve of war in BH.

During the cross-examination conducted by Krajisnik's British defence counsel Nicholas Stewart, Deronjic testified how in the summer of 1991, the SDS leadership ordered all the local party boards to draw maps of their municipalities showing, in different colours, where Serbs lived and where the other ethnic groups lived as well as land ownership in percentages. At the time, Deronjic was president of the municipal SDS board in Bratunac in eastern Bosnia.

Deronjic said that the municipal SDS board made the map, but that it was "a rather rough approximation,” since in the Bratunac municipality, the population was for the most part mixed. Even the houses and properties were intermingled and the "division could not be made accurately."

Nevertheless, as the witness claims, the maps sent from Bratunac and other municipal SDS boards to the party leadership were used to establish "Serbian municipalities and Serbian autonomous regions" in variants A and B of the "Instruction on the Organization and Work of the Organs of the Serbian People in BH in Emergency Situations." The Instructions in the two variants issued by the leadership of the Serbian Democratic Party is one of the key documents the prosecution relies on to prove that the "takeover of power" and the ethnic cleansing of territories the SDS considered to be "Serbian" were planned.

In its cross-examination, the defence tried to downplay the political importance of the witness, pointing to the fact that in 1991 and 1992, Deronjic was a low-ranking local politician, that he did not know the accused Momcilo Krajisnik personally, and that he could not give any relevant testimony against the activities of the highest-ranking organs and people in the Serbian Democratic Party. When Miroslav Deronjic saw where the defence was heading, he responded, in a huff, "I personally knew Radovan Karadzic, and I was the most important politician in Bratunac and had a lot of influence in the region."

The defence then put it to the witness that before war broke out, all three ethnic groups in BH were arming themselves and not just the Serbs, as Deronjic had testified in his examination-in-chief. "There were too many weapons in Bratunac and in the municipality," said the witness, who agreed with the defence that Muslims had been arming themselves, too, especially after the killing of two Muslims in the village of Kravice on 31 August 1991. After that event, roadblocks were set up at the access routes to those parts of town with a Muslim or Serbian majority, as well as at the access routes to villages. The tension continued until the end of the year.

When the defence insisted that he make an assessment whether there was a "balance in the quantity of arms" between the sides, Deronjic replied, "Serbs had more weapons, but Muslims were more numerous."

The questions asked by judges after the prosecution and defence concluded their examination indicated that the Trial Chamber put a lot of weight on Deronjic's testimony, but that at the same time, it took with a grain of salt some of the claims of the SDS insider-turned-valuable-collaborator of the OTP following his plea agreement. This is the sixth time he has testified in the past four months.