THE “SHIPMENT” TO PALE

Why did Miroslav Deronjic send 400 Bosniak detainees from Bratunac to Pale, the "capital" of what was then the Serbian Republic of Bosnia and Herzegovina, in May 1992? 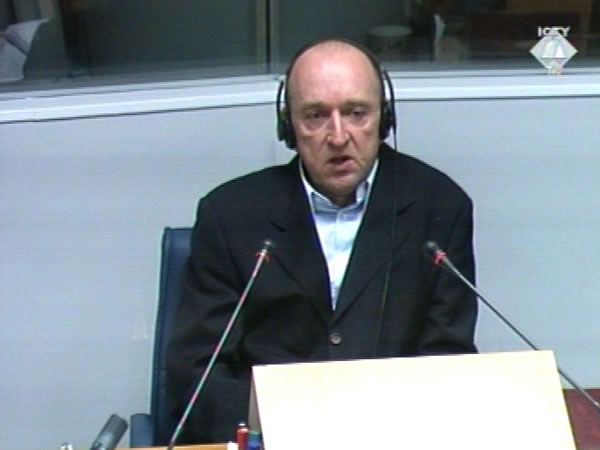 Miroslav Deronjic, witness at the Momcilo Krajisnik trial
In the middle of the night between 14 and 15 May 1992, Miroslav Deronjic, then the President of the Crisis Staff of the Bratunac municipality in eastern Bosnia, clandestinely took about 400 Bosniak detainees from both the gym of the local elementary school and a nearby hangar. He was assisted by the civil police. He loaded the detainees onto three or four trucks and sent them to Pale, the "capital" of what was then the Serbian Republic of Bosnia and Herzegovina. When he testified today at the trial of Momcilo Krajisnik, former Bosnian Serb political leader, Deronjic said that he did it because he wanted to send a message to the leaders in Pale:

The leaders in Pale, Deronjic claims, were "shocked" by his move and did not want to take receipt of the "shipment" from Bratunac. Deronjic was persistent and ordered his men escorting the convoy not to bring the Bosniaks back to Bratunac on any account, but rather to set them free if Pale did not want them. After two days of negotiations, Pale relented and took receipt of the "shipment.” A year or two later, Deronjic recalls, Radovan Karadzic "reproached" him for it.

Deronjic testified he was prompted to do this after he was alerted, on 11 May 1992, to the detainees’ situation in the hangar and the gym. The military police providing security at the make-shift detention facilities allowed paramilitaries and local Serbs from Srebrenica to enter the hangar and the gym to beat, kill and remove detainees, who would then disappear without a trace. Deronjic was also told that some of the detainees who had been taken away were later killed on the bank of the Drina River. He went to check the reports and saw several bodies in the water near the riverbank.

Deronjic claims that he does not know the exact number of people killed in Bratunac between 10 and 15 May 1002. He says he received inconsistent information, with the numbers varying between 50 and 100 victims. After the Bosniak detainees were sent to Pale, the bodies of 13 people who had been killed were found in the hangar and the gym. At the request of the Crisis Staff, a military pathologist came from Belgrade, determined the cause of death, and identified the victims. They were then buried on the banks of the Drina River.

After these events, Deronjic's Crisis Staff passed a decision to expel paramilitary formations, or volunteers, who had come from Serbia. By then, most of the Bosniak civilians had already left or been expelled from Bratunac. Up until May 1992, two-thirds of the population in the town of Bratunac had been Bosniaks.

The testimony of Miroslav Deronjic, an SDS insider and penitent who has pled guilty for the massacre in the village of Glogova on 9 May 1992, will continue with cross-examination by lawyers for the accused, Momcilo Krajisnik.