THE BIGGEST COVER-UP IN UN HISTORY

Diego Arria, former Venezuelan ambassador to the UN and current special advisor to the UN Secretary General, testifies at the Milosevic trial that the UN Secretariat, Boutros-Ghali and UNPROFOR fed misinformation to the Security Council about the real situation in Bosnia between 1992 and 1995. 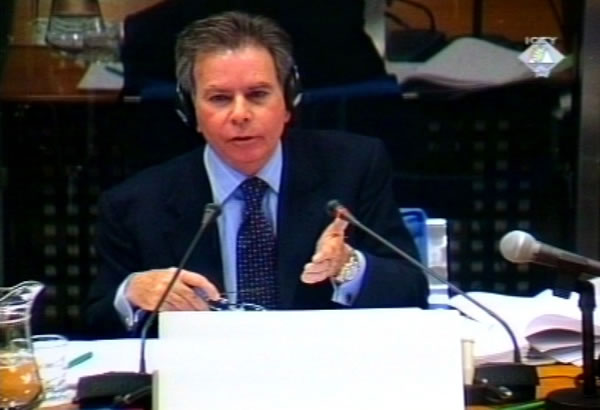 Diego Arria, witness at the Slobodan Milosevic trial
With their case drawing to a close, the Prosecution put former Venezuelan ambassador to the UN, Diego Arria, on the witness stand in order to show that in the first half of the '90s, the authorities in Serbia and the accused Milosevic were aware of what was happening in Bosnia and Herzegovina [BH]. The prosecutor found it very easy to do: the witness confirmed that the accused "could not have been unaware" of the numerous Security Council resolutions and decisions passed by other UN organs, including the International Court of Justice, relating to events in Bosnia and Herzegovina and the role of the then-Yugoslavia in those events.

The testimony of the former ambassador, who is now special advisor to the UN Secretary General, gave the prosecutor much more than just a confirmation that Milosevic knew what was going on and was therefore obliged to prevent it or to punish the perpetrators. Diego Arria's testimony was devastating for the UN-- perhaps even more so than for Milosevic--as he exposed the conduct of the UN and its organs during the war in Bosnia and Herzegovina.

According to the ambassador, the resolutions the Security Council passed in its attempt to exert influence on the warring parties in BH, particularly on the Bosnian Serbs and Serbia itself, were "too weak and irrelevant" and left the impression that the international community "would not do anything to stop the conflict." He was present when those resolutions were passed. In the case of Bosnia, Arria said, there prevailed "double standards: we did not treat them as Europeans, but as Muslims, because we feared a Muslim state in Europe."

Arria claims that Secretary General Boutros-Ghali and his Secretariat withheld information about the real situation in the field or fed the Security Council misinformation. As an example of the way in which information was withheld, he spoke about a letter in which Sadako Ogata, then UN High Commissioner for Refugees, warned the UN about the tragic situation in Srebrenica in March 1993. The letter seems to have become "misplaced" somewhere in the office of the Secretary-General, and Arria first saw it 11 years later in The Hague, when the Prosecution produced it.

The humanitarian disaster in Srebrenica came before the Security Council 12 days after Sadako Ogata's dramatic and urgent appeal, after the situation on the ground had already changed: Bosniak forces had capitulated and UNPROFOR had disarmed them. Ghali's secretariat, claims Arria, knew about the change but "failed" to inform the Security Council of it on the eve of the Srebrenica debate or even in the course of it.

After the debate was over and the resolution was passed, Ambassador Arria led a Security Council mission on a visit to Srebrenica. He says that then he "understood why the UN was reluctant to dispatch missions anywhere: because missions saw the truth." Arria claims that VRS officers and soldiers on the one hand, and UNPROFOR commander Brigadier Hays on the other, vied with each other in an effort to prevent his mission from seeing the truth about Srebrenica. Arria stated that Brigadier Hays had told him that as far as he was concerned, "Security Council resolutions were irrelevant." He proceeded to ask the court, "Can you then imagine what the Serbs thought about these resolutions?

In his report to the Security Council filed upon his return to New York, Ambassador Arria described the situation in Srebrenica as "slow-motion genocide" and the besieged enclave itself as "a concentration camp policed by UNPROFOR." He also warned in his report of a "potential massacre in which there could be 25,000 victims." Answering the prosecutor's question today, Arria said that even then "it was clear that it was just a matter of time before the massacre would happen" or before the "slow-motion genocide" would become a "real genocide." The United Nations, he added, was unwilling to do anything to prevent that.

In his cross-examination, Slobodan Milosevic found himself in a really strange situation: he was defending the Security Council and the former UN Secretary-General --whom he frequently accuses of having founded, without proper authority, an "illegal Tribunal"--against the accusations of the former Venezuelan ambassador. Arria, however, not only stood by his claims, but, in response to a question by Milosevic, he added to them. In the course of the war in Bosnia, said Arria, the UN carried out the biggest cover-up operation, resulting in a ravaged and ethnically divided country and 200,000 deaths.