This is an excerpt from the transcript of The Fugitives, a documentary produced by SENSE in 2004, explaining how in July 1996 Holbrooke and Milosevic cut a deal to remove Radovan Karadzic from political and public life 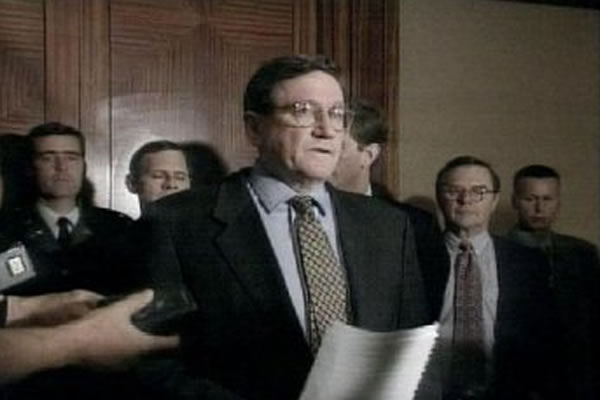 Richard Holbrooke with a signed document
The war in Bosnia and Herzegovina ended with the Dayton Agreement. One of its provisions is that persons accused of war crimes cannot hold any public or political office. Despite that, Karadžić defiantly held on to both his functions: as the president of Republika Srpska and the president of the ruling Serbian Democratic Party, doing all he could – and he could do quite a lot – to sabotage the implementation of the peace agreement.

The international community is pressuring me not only to resign, but to not be involved in party matters and to not support our candidates. For them, the opponent is not Radovan Karadžić but the SDS

His arrest and transfer to The Hague would, of course, be the most logical solution, but no one was willing to risk a military operation, and even less, to risk a possible violent reprisal by Karadžić`s followers. Alternative solutions were sought, fuelling suspicions that a deal would be cut, at the expense of the Tribunal and of justice.

The answer from the US is no deal. The US will not agree to any deal for Karadžić and Mladić. They are indicted war criminals . The only deal for them is to be arrested & brought to the Hague for prosecution, for trial as war criminals.

We cannot tolerate Mr Karadžić having any sort of public function.. If people call themselves Donald Duck or the Emperor of China, I don’t really care. They can call themselves whatever they want if it’s just that. If there is any substance to it, this is different. It is the substance that is of concern and Dr Karadžić is a non-person.

[IMAGE]3576[/IMAGE]The mission to neutralize Karadžić was entrusted to the American "diplomatic magician" Richard Holbrooke, who had gone into banking in the meantime. In mid-July 1996 he was reactivated and sent to Belgrade with the mission to eliminate Karadžić from the public stage and from politics, thus alleviating the pressure for his arrest. The only instruction he received before he was sent on the mission was "to do something with his old creative ambiguity." This is precisely what happened. After ten hours of talks with the then presidents of Yugoslavia and Serbia, Slobodan Milosevic and Milan Milutinovic, and a Bosnian Serb delegation, who were in constant contact over the phone with Karadžić in Pale, in the small hours, Richard Holbrooke appeared before the reporters, triumphant, with a statement worthy of his "old creative ambiguity":

As of this morning, Karadžić is no longer president of Republica Srpska. He has relinquished the office and all powers associated thereto. Madam Plavšić is the temporary acting president and she will remain in that position until the elections pick a new president.
Number two – Dr Karadžić states that he shall withdraw immediately and permanently from all political activities. He will not appear in public, or on radio, or television or the other media or means of communication or participate in any way in the elections and I want to stress he knew what he was signing. He knew he was signing the end of his political career.