Vojislav Seselj claims Safet Sejdic, Roma from Sarajevo, joined the VRS voluntarily and fought bravely like a hero until the end of the war in BH. The witness replies he never saw combat and was forced to serve Serb soldiers 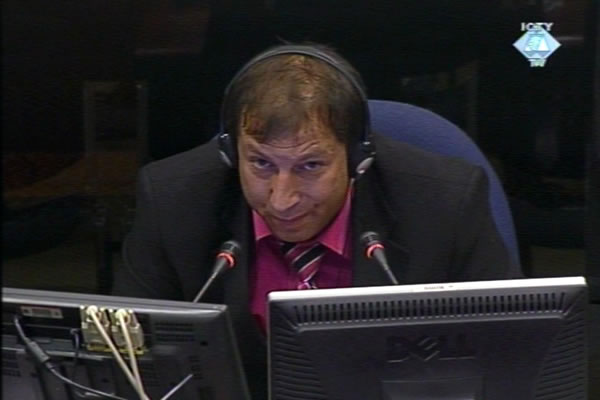 Safet Sejdic, witness at the Vojislav Seselj trial
Vojislav Seselj, Serbian Radical Party leader, challenged today in his cross-examination the claims made by prosecution witness Safet Sejdic, who testified how he was forced to work for the Serb forces in the area of the Sarajevo Vogosca municipality for years. According to the accused, the witness was never a prisoner of Serb forces. He was a ‘Serb hero’ who joined the VRS voluntarily.

To corroborate his claims, Seselj showed two documents which state Sejdic was a VRS soldier. Seselj also showed the statement the witness’s father gave to the BH investigative bodies in 1996. According to him, his son was ‘mobilized by the Serb army’ where he was issued a light machine gun. Sejdic doubts that his father said something like that. As for the machine gun, at times he was made to carry it for the Serb soldiers; on other occasions, he had to carry other weapons and ammunition for them.

As usual, Seselj devoted part of his examination on the statements sent to him by his sympathizers, this time members of the VRS intervention platoon from Semizovci. They all had spoke about Sejdic in glowing terms, describing him as a ‘great Serb fighter’, who’d earned respect of everyone in the unit. Sejdic claims those are all lies, repeating that he served in the Serb unit only because he was forced to do it because they threatened he and his family would be killed.

As the cross-examination went on, Seselj challenged Sejdic’s claim that he saw Seselj in 1993 on the Nisic plateau, visiting war leader Vaslije Vidovic’s Chetnik and other Serb forces on the eve of the attack on Crna Rijeka. According to the accused, the attack was launched on 9 November 1993, during the election campaign. On that day and in the days that followed, Seselj was a guest in the Serbian media and it ‘never occurred’ to him to go to Republika Srpska. Seselj substantiated this with transcripts of his radio interviews published in one of his books. They show in those days Seselj was in Loznica and Sabac, towns at the border with BH. ‘Just as you visited those places, you could get to Vogosca by helicopter in half an hour’, the witness replied, maintaining that he saw Seselj in the company of Radovan Karadzic and Ratko Mladic on the Nisic plateau.

Seselj said his associates had contacted Radovan Karadzic over weekend; Karadzic told them he had been in Belgrade on 9 November 1993 and not on the Nisic plateau. Seselj added that he expected to get a similar confirmation from his friend Ratko Mladic, who had also been contacted by Seselj’s associates.

Sejdic’s evidence will be completed tomorrow.