As soon as the Appeals Chamber confirmed his first-instance verdict and 20-year prison sentence, Praljak shouted that he was not a war criminal and drank poison. After first aid was administered at the Tribunal, Praljak was taken to hospital. The Appeals Chamber resumed the hearing after two and a half hours. The findings in the trial judgment about the existence of an international armed conflict and a joint criminal enterprise whose goals were shared by President Franjo Tudjman and other Croatian officials. The sentences delivered by the Trial Chamber were confirmed for all the accused 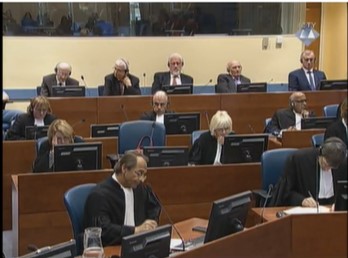 After the Appeals Chamber confirmed his 20-year prison sentence, the accused Slobodan Praljak shouted, ‘I am not a war criminal’ and ‘I reject this judgment with contempt’. He then proceeded to drink something out of a vial he had in his hand. There was turmoil in the courtroom and in the public gallery. Praljak’s defense counsel Natasa Faveaux shouted, ‘It seems my client has taken poison’. Presiding judge Agius ordered the curtains to be drawn and adjourned the hearing.

Before the interruption, the Appeals Chamber presented its conclusions on the appeals filed by the defense and the prosecution against the first-instance judgment rendered in May 2013. The Trial Chamber convicted the six former Herceg Bosna leaders of their participation in the joint criminal enterprise whose goal it was to establish Croatian domination in the part of the BH territory that comprised the self-proclaimed Croatian Community of Herceg Bosna. The six accused were sentenced to a total of 111 years in prison: Jadranko Prlic to 25, Bruno Stojic, Slobodan Praljak and Milivoj Petkovic to 20, Valentin Coric to 16 and Berislav Pusic to 10 years in prison.

The Appeals Chamber confirmed the key findings in the trial judgment: the conflict in BH was international because of Croatia’s involvement (the judges found that Croatia in fact ‘held effective power in some municipalities through the HVO’), the goal of the joint criminal enterprise was shared by President Franjo Tudjman and other Croatian officials, and ‘there was a state occupation’ in some municipalities.

The Appeals Chamber granted the prosecution’s appeal in which they sought a conviction on the so-called Category III of the joint criminal enterprise, for crimes which were a foreseeable and natural consequence of their actions, and on the basis of command responsibility for their failure to punish their subordinates who had committed crimes. The Appeals Chamber nevertheless refused to enter new convictions or to order a re-trial.

Before the interruption, the Appeals Chamber had confirmed the sentences to Jadranko Prlic (25) and Bruno Stojic (20 years in prison).

After two and a half hours, the Appeals Chamber continued the hearing in another courtroom with a much smaller public gallery with just enough space for the families of the accused. Most of the reporters thus had to watch the last judgment rendered by the International Criminal Tribunal for the former Yugoslavia on the screens in the Tribunal’s lobby.

As the hearing continued, the Appeals Chamber confirmed the first-instance sentences to the remaining three accused: Milivoj Petkovic (20), Valentin Coric (16) and Berislav Pusic (10 years in prison). Before concluding the hearing, the presiding judge noted that the Dutch authorities had launched an enquiry into the events leading up to the drama in the Tribunal’s courtroom 1.

Almost three hours after the hearing the ICTY spokesperson Nenad Gločevski confirmed that Slobodan Praljak passed away at the nearby hospital where he was taken after receiving assistance from the ICTY medical staff. 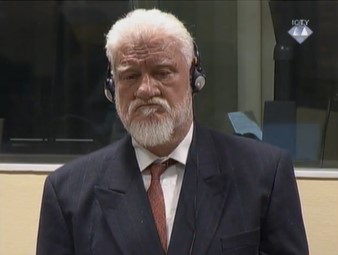