FLORENCE HARTMANN RELEASED AFTER SERVING TWO THIRDS OF HER SENTENCE

After Florence Hartmann has served three thirds of her seven-day prison sentence, President Theodor Meron granted her early release. The President issued the decision in order to ensure ‘equal treatment’ of all the convicted individuals, and in light of the demonstrated degree of rehabilitation and exemplary conduct in prison 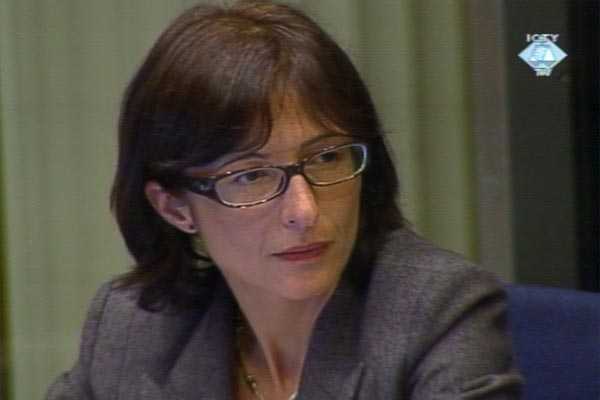 Florence Hartmann testifying in the trial of the 'Vukovar three'

Despite the gravity of her crime, Theodor Meron, President of the Mechanism for the International Criminal Tribunals, decided today to grant Florence Hartmann early release from the UN Detention Unit. Hartmann has served two thirds of her seven-day prison sentence.

In a lengthy explanation over nine pages the President notes that the demonstrated ‘degree of rehabilitation’ and the ‘exemplary conduct’ in the Detention Unit confirmed in the report Meron received from the UN Detention Comanding officer militated in favor of Hartmann’s early release. Hartmann likewise complied with all the orders issued by the detention unit staff and in the five days she spent in the Detention Unit she did not pose a threat to either herself or other convicts.

President Meron considered the complaints against the conditions in the detention submitted by Guenael Mettraux, Hartmann’s defense counsel, on 25 March 2016 and found them unfounded. According to Meron, Hartmann’s segregation from other persons in the Detention Unit was in line with the international practice of separating male and female convicts. Secondly, the president notes that if was very difficult to guarantee Hartmann’s safety in detention given the fact that she had been a prominent official of the Tribunal’s OTP that prosecuted other detainees. The fact that Hartmann is a journalist, and the author of several books, could have prompted other individuals in the Detention Unit to communicate directly with the media. They would thus override the restrictions imposed on the convicts and accused persons, who can only communicate in writing. As for those not predisposed to avail themselves of the possibility to communicate directly with the media in the person of Hartmann, her segregation served to protect their privacy: Hartman may decid to recount her observations or conversations with other detainees in a future article or book.

Judge Meron claims Hartmann was never placed in isolation, since she was able to receive visits, write letters and keep in touch over the phone with her family and friends.

Finally, Mettraux’s complaint against the round-the-clock surveillance and non-stop light on in her prison cell was also dismissed. Judge Meron explains that there is a switch in the prison cell that Hartmann could use to turn the light on and off as she pleased.