CONFLICT IN CROATIA THROUGH EYES OF BRITON

After Goran Hadzic returned to the dock, the defense called Amanda Celar as its next witness. During the war in Croatia Celar lived in Osijek and Beli Manastir. The Briton was married to a Serb she described as a ‘nationalist’, helped the Serb refugees in Baranja, she feared the Croat ‘rhetoric’ and the Croatian checkerboard flag. Celar wasn’t interested in the Serb Radical Party policy of advocating a Greater Serbia 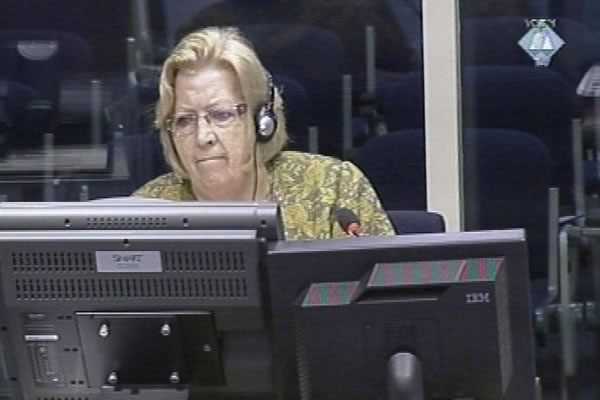 Goran Hadzic finally completed his marathon evidence that began on 3 July 2014. The defense called its next witness, Amanda Celar. She is a Briton married to Ilija Celar, a member of the Serb special defense forces in Baranja.

Celar’s written statement was admitted into evidence, and as per usual, the summary wasn’t read out in court. As a result, only the barest bones of her testimony were presented in the examination-in-chief. As Amanda Celar said, from 1987 to 1996 she lived first in Osijek, then in Jagodnjak and finally in Beli Manastir. According to her, she helped Serb refugees from other parts of Croatia by providing them with kitchen utensils or at least to offer them a cup of coffee to welcome them. Celar contested the report filed by Blandina Nega, the UN coordinator for civil affairs in Sector East. Nega ‘linked the rise of terrorism in the region with the arrival of Serb refuges from Bosnia and Croatia’. The witness claims that she never met any Serb refugees from Bosnia.

In a bid to corroborate the witness’s claim that the Western media were not covering the situation in Croatia objectively, the defense counsel showed an article published in the British newspaper The Independent in March 1992. The article states that the ‘self-proclaimed’ mayor of Beli Manastir Boro Zivanovic announced ‘that for the next thousand years, there would be the Serb Reich in Baranja’. According to the article, Serbs were not allowed to leave the area because of concerns that they might flee and never come back, 50 Hungarians and Croats were killed and Catholic churches were blown up. Amanda Celar argued that the claims in the text were not true at all.

As she recounted, during the conflict she sent numerous appeals to London and a letter to the UN with a warning that Croats were preparing to cross the Drava river. According to Celar, her husband Ilija Celar told her that; he had taken part in the fighting. After that, the witness met with the representatives of the Belgian Battalion in Beli Manastir. They had taken the military barracks, set up a security perimeter and did not have a clue about the events in the field, because they never went out on patrols, Celar said.

In the cross-examination, the witness said that she didn’t support the Serbian Democratic Party, that she was a ‘Serbophile’, and that her husband Ilija was a ‘nationalist’. Celar told the prosecutor that at the beginning of the conflict she heard the ‘rhetoric of the Croat side’, but not the Serb rhetoric about a Greater Serbia. The appearance of the Black Shirts in Osijek and the flying of flags with the Croatian checkerboard emblem were upsetting, Celar said, because they reminded her of World War II and the Independent State of Croatia. When the prosecutor brought up the inflammatory statements made by Vojislav Seselj and Milan Paroski, the witness said she had no interest in them because she was not into politics at all.

As Amanda Celar explained, she didn’t know about Hadzic’s statements about the expulsion of ‘Pavelic’s volunteers’, made twice in an interview to the newspapers Politika in September 1991. The witness herself gave a statement to the Belgrade TV. The footage was played in court, but she claimed some parts of the report weren’t true.

When she was asked if she had left Osijek voluntarily, Amanda Celar replied that she and her husband left because they were afraid. Celar’s husband was ‘targeted by the HOS because he was a member of the Serb Radical Party’. The defense will re-examine the witness tomorrow.