HADZIC WAS CONSULTED ON EVERYTHING AND NOTHING

Borislav Bogunovic, insider witness of the prosecution at the trial of Goran Hadzic first claimed that the government of the Serb Autonomous Republic of Eastern Slavonia reached decisions ‘by consensus’ and that prime minister Goran Hadzic's opinion was ‘sought for every issue’, only to change tack midway through his testimony, claiming Hadzic’s government was ‘virtual’ and that ‘its opinion was never sought’, least of all by the JNA, the Territorial Defense commander Radovan Stojicic Badza and the Tigers’ leader Zeljko Raznatovic Arkan 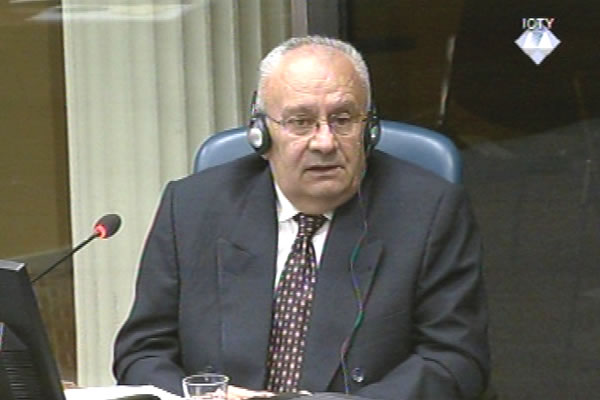 The prosecution rested its case at the trial of Goran Hadzic in October 2013, but today it was allowed to call one last witness, Borislav Bogunovic. He is an insider witness, and was ‘unavailable’ during the trial because he is serving a 20-year prison sentence in Serbia. As he explained, the sentence, which is reserved for the gravest crimes, ‘has nothing to do’ with the war in Croatia.

Bogunovic held various positions during the time relevant for the indictment against Goran Hadzic, between June 1991 and the end of 1993. Hadzic was the former prime minister of the Serb Autonomous Region of Slavonia, Baranja and Western Srem and later became the president of the Republic of Serbian Krajina. Bogunovic was the president of the Crisis Staff and the Territorial Defense in Negoslavci near Vukovar, in early 1991. In August 1991, Bogunovic was promoted to the post of the interior minister. In 1992, Bogunovic was appointed deputy prime minister. Bogunovic's final position was the deputy speaker of the RSK Assembly.

The statement Bogunovic gave to the OTP investigators in 2012 was admitted into evidence. The prosecutor had no additional questions for the witness. In the cross-examination, Bogunovic often appeared to be testifying in Goran Hadzic's defense, rather than for the prosecution as an insider witness who had knowledge about Goran Hadzic’s responsibility for the crimes against humanity and violations of laws and customs of war in Eastern Slavonia.

The defense tried to use Bogunovic’s evidence to shift the blame for the crimes in Eastern Slavonia on Radovan Stojicic Badza, former commander of the Territorial Defense, and Zeljko Raznatovic Arkan, commander of the Tigers unit. Stojicic was transferred to that area by the Serbian MUP. In Bogunovic’s words, Stojicic was a ‘man difficult to work with’. When `Stojicic was transferred to Eastern Slavonia he lost some of the importance he used to have in Belgrade. Stojicic did not have the authority ‘to issue orders’ because the government of Eastern Slavonia reached decisions ‘by consensus’. That ‘didn’t suit’ Stojicic.

Bogunovic dismissed the defense’s suggestion that Badza assumed the command and control over the police stations in Dalj and Borovo Selo. ‘Everyone was accountable to Goran Hadzic’, Bogunovic said first. ‘Without him we couldn’t make any important moves’, Bogunovic explained. But then, as the hearing continued, Bogunovic changed tack, claiming that Stojicic and Zeljko Raznatovic weren’t subordinated to the JNA. No one could issue instructions or orders to them, Bogunovic explained. Arkan did his own thing, he carried out actions as he saw fit and wasn't accountable to anyone, Bogunovic claimed.

Finally, Bogunovic described Hadzic’s government as ‘virtual’: the cabinet ‘didn’t make any decisions at all’ and couldn’t implement anything. ‘The army didn’t accept the civilian government, and we couldn't do anything without their knowledge’, Bogunovic explained, adding that Badza and Arkan managed to 'elbow out' the government so that it no longer had any say in anything.