HARADINAJ AND BALAJ ACQUITTED AGAIN, NO NEW SENTENCE FOR BRAHIMAJ

Former KLA commanders Ramush Haradinaj, Idriz Balaj and Lahi Brahimaj were acquitted of the crimes against Albanian, Roma and Serb civilians in the Jablanica prison camp. The judges found that some KLA crimes had been proven, but the existence of a joint criminal enterprise remained unproven 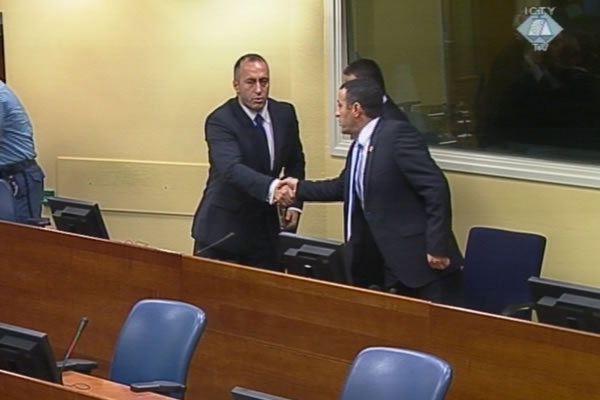 Ramuh Haradinaj, Idriz Balaj and Lahi Brahimaj in the courtroom

Ramush Haradinaj, Idriz Balaj and Lahi Brahimaj were acquitted on all counts in the indictment charging them with crimes against Albanians, Serbs and Roma in the prison camp in Jablanica run by the Kosovo Liberation Army in 1998. The judgment noted that the crimes listed in four of the six counts were partially proven and were attributable to the KLA but there was no evidence of the responsibility of the accused, with the exception of Lahi Brahimaj. He was found guilty on two counts; he had been sentenced to six years in prison in the first trial judgment.

Today, the second trial judgment was handed down to the former KLA commanders. In 2008, the Trial Chamber acquitted Haradinaj and Balaj of charges related to the crimes in the Dukagjin area in Kosovo. Brahimaj was convicted for the crimes in Jablanica. The Appeals Chamber ordered a re-trial on six counts for Haradinaj and Balaj and four counts for Brahimaj: these counts pertain to the Jablanica crimes. The Appeals Chamber found that the trial was completed before the prosecution was able to examine two of its witnesses. The testimonies of those two unwilling witnesses, some new witnesses and a large number of ‘old’ witnesses from the previous trial – 56 in total – were admitted into evidence at the retrial but did not have any major impact in terms of proving the accused guilty.

Presiding judge Bakone Moloto read out the summary of the judgment. According to the summary, the prosecution proved the abuse of 10 persons in Jablanica: Serb traffic police officer Nenad Remistar and nine civilians – Jah Bushati, Pal Krasniqi, Skender Kuqi, an unknown Bosnian detainee, three Montenegrins and two protected prosecution witnesses. Some of them were never seen after they were released from Jablanica. The prosecution called too little or no evidence at all in relation to their deaths and their fate remained unknown. The sole exception is Skender Kuqi: it was established that he died in hospital after two KLA soldiers beat him in Jablanica. The evidence on the abuse of two other Albanian civilians during their arrest in the village of Zabelj was also accepted.

The judges found there was no evidence that Ramush Haradinaj and Idriz Balaj participated in those crimes and that they were present in Jablanica when the crimes were committed. On the contrary, there is evidence that Haradinaj visited Jablanica at one point and demanded the release of Skender Kuqi. Haradinaj said ‘such things shouldn’t be happen again because they harm our cause’. Likewise, Witness 3, whose identity remained protected, said before the Tribunal that when he left Jablanica Haradinaj offered him food and accommodation in his headquarters in Glodjan. The Trial Chamber concluded there was not enough evidence to prove Brahimaj’s responsibility except in an incident involving the abuse of two protected prosecution witnesses. Brahimaj was already sentenced for that crime.

These crimes are alleged in counts three to six in the indictment. The allegations in the first two counts, relating to the abuse and murder of four Roma and one Serb civilian, were rejected as the testimony of several prosecution witnesses was found to be entirely unreliable. Among them are witnesses 80 and 81. According to the judgment, one of them gave an ‘inconsistent and contradictory’ statement, while the other ‘changed his statement and several times contradicted his previous allegations’.

The Trial Chamber found that there was not enough evidence to support the existence of a joint criminal enterprise aimed at establishing KLA control in the entire Dukagjin area through unlawful removal and abuse of Serbs, Roma and disloyal Albanians. The prosecution offered evidence on the abuse of a number of civilians outside of Jablanica but the judges concluded that these incidents didn’t indicate there was a ‘pattern or a wider plan’ to abuse civilians. After civilians were beaten, KLA soldiers would help them, accusing their ‘extremist’ fellow fighters for the crimes, the judges noted. Some written exhibits, such as KLA press releases, a list of purported Albanian ‘collaborators’ and excerpts from the KLA military police rules were also rejected as insufficient.

As the Trial Chamber concluded, the available evidence could have been used to prove the existence of a joint criminal enterprise aimed at the detention and abuse of civilians in the Jablanica prison camp, with Lahi Brahimaj and his cousins Nazmi, Hamza and Naser Brahimaj and ‘other members of the KLA’ as its participants. As this was not alleged in the indictment, the judges didn’t consider it.