HOW HADZIC ‘COLLUDED WITH SLOBODAN MILOSEVIC

In the spring of 1991, Goran Hadzic ‘fell under Slobodan Milosevic's influence', claims Hadzic's former friend and fellow party member Borivoje Savic. When the witness told Hadzic such 'colluding' was hardly necessary, Hadzic replied that Milosevic was a 'good man and a great Serb'. As the witness said, the war in Croatia broke out soon afterwards, with Belgrade's active involvement and the participation of volunteers from Serbia 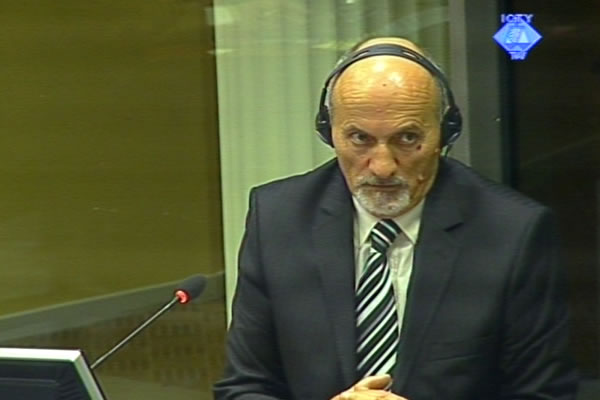 The trial of the former president of the so-called Republic of Serbian Krajina Goran Hadzic continued today with the evidence of Hadzic's former schoolmate and colleague from the Serbian Democratic Party Borivoje Savic. Hadzic and Savic were among the founders of the SDS board in Vukovar. The Croatian police arrested them and beat them on 1 April 1991 in Plitvice as they were on their way back from a Main Board meeting in Obrovac. After Hadzic and Savic recovered in the prison hospital, the Croatian MUP leadership decided to release them.

The previous prosecution witness, Serb representative from Western Slavonia Veljko Dzakula, claimed that until his arrest Hadzic had been 'tolerant and democratic', ready to negotiate with the Croatian authorities. After the event, Hadzic became more radical and decided to go 'to war with Croats'. In his statement to the OTP investigators, Savic made a similar assessment. After the arrest, Savic 'cut all ties with Hadzic' because Hadzic ‘fell under Slobodan Milosevic's influence'.

The prosecutor argued that even before his arrest Hadzic advocated radical attitudes and played a video recording from a meeting of the SDS board in Vukovar in January 1991. In the video, Hadzic threatens he will 'sever all ties between Serbs and Croats if Croats do not renounce the Ustashas'. Hadzic is also against a dialogue with Zagreb saying that 'dialogue is for humans and there is no talking with non-humans'. According to the witness, Hadzic’s speech was an example of the 'usual rhetoric designed to elicit applause'. The witness disagreed with such 'unnecessary displays' by Hadzic.

Savic says that after the Croatian Democratic Union came to power, the Serb people feared a rerun of the World War II crimes. A change in the Constitution which stripped Serbs of their status of a constituent people and turned them into an ethnic minority was particular cause for concern. Nevertheless, the witness noted, he was in favor of engaging the authorities in Zagreb in a dialogue and was opposed to Hadzic's policy of turning to Belgrade for guidance. Once the witness asked Hadzic 'what all this colluding with Milosevic was all about'. Hadzic replied that Milosevic was ‘a good man and a great Serb who doesn’t do anything out of political interest'.

Another video recording from early November 1991 was shown in court. In the video, Goran Hadzic talks to a Belgrade TV journalist, describing the military situation in Eastern Slavonia. Hadzic says that he expects ‘Vukovar to be liberated soon'. He also notes that many volunteers from Slavonia and Serbia responded to the call from the local authorities. The 'Belgrade group is particularly prominent’, Hadzic says. The witness said that the volunteers were taken in, armed and sent to the front lines in the Territorial Defense HQ in Sid. The HQ was located in the premises of Milosevic's Socialist Party of Serbia and Mihalj Kertes, Serbian police minister, was there from time to time. Most of the volunteers were originally from Eastern Slavonia.

The cross-examination of the witness began in the second part of the hearing.