‘NO CONDITIONS FOR RETURN, BUT NO EFFORT TO PUT THEM IN PLACE’

Former Serb leader from Western Slavonia Veljko Dzakula contends that the RSK authorities headed by Goran Hadzic made the return of Croat refugees impossible under various pretexts - ranging from claims that Croat refugees were 'descendants of the Ustashas' to accusations that they were members of 'nationalist and fascist parties'. The most common reason was that 'the conditions for the return have not yet been put in place’'. He also spoke about Hadzic's opinion on Croats' 'genetic hatred' towards Serbs 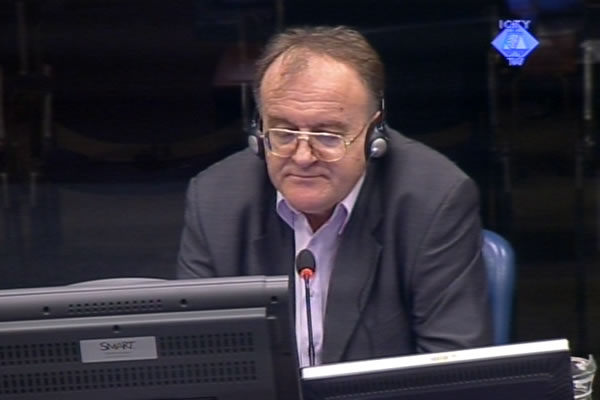 Yesterday, president of the Serb Democratic Forum Veljko Dzakula testified about the beginnings of the conflict in Croatia. Dzakula continued his testimony today speaking about how the situation developed after 26 February 1992, when the representatives of the three Serb entities in Croatia - SAO of Krajina, SAO of Western Slavonia and SAO of Slavonia, Baranja and Western Srem - declared they would unite into the Republic of Serbian Krajina. On the same day, the Assembly appointed Goran Hadzic the president of the newly formed entity while Dzakula was appointed deputy prime minister.

The provisions of the RSK Constitution about the presidential powers were admitted into evidence. The witness gave an example of the president’s influence over the army. In January 1993, when Dzakula learned that Kosta Novakovic, chief of the Krajina Army Main Staff, ordered the attack on Novska and Nova Gradiska, Dzakula protested against it in a bid to prevent it. Novakovic told Dzakula that he 'had nothing to discuss' with him and that he only obeyed the orders of his 'supreme commander', Hadzic. The witness called Hadzic and was able to prevent the attack.

From Dzakula's evidence it was clear that relations between him and Hadzic, and between the representatives of Western Slavonia and the rest of the RSK, were strained after the Vance plan was signed. The president and his followers obstructed the implementation of the provisions on the demilitarization and the return of the Croat and Serb refugees to their homes. The witness said that Hadzic was opposed to the co-existence of Serbs and Croats. In the presence of Zeljko Raznatovic Arkan in Erdut, Hadzic asked the witness: 'Brother Veljko, is it true that you want to live with Croats?'.In fear of Arkan's 'glaring look’, Dzakula denied the claim and Hadzic was happy.

The witness contends that the RSK authorities led by Hadzic prevented the Croats from returning to their homes, although they advocated their right to return in public. In May 1992, a declaration was adopted allowing only the return of 'indigenous' Croats to Eastern Slavonia, and denying that right to the 'newcomers' who had settled in Eastern Slavonia after World War II because the latter were considered the descendants of the Ustashas from Herzegovina. The prosecution showed Hadzic's interview to the Belgrade newspaper Borba. In the interview, Hadzic said that it was not about the 'genetic guilt of the Croats' but added that 'it is a fact that some of them harbor 'genetic hatred towards Serbs'.

There followed a decision on the return of refugees ordering that their 'direct or indirect involvement' in the conflicts and membership in 'nationalist and fascist parties' be checked. According to the witness, the ruling Croatian Democratic Union was considered as a nationalist and fascist party. All in all, these provisions allowed a small number of Croats to return, at least in theory, but in practice no one could go back to their homes. ‘They’d say that the conditions had not been put in place for their return, but no effort was made to put them in place’', the witness said.

The only step in that direction was made by the Serb representatives from Western Slavonia when the Daruvar Agreement was signed on 18 February 1993. In preparations for the return of refugees, the agreement provided solutions for various municipal and economic issues. Three months later, the witness and other Serb signatories of the agreement were relieved of all their duties in the RSK. Soon afterwards, they were arrested as part of an investigation into 'the espionage and attempted annexation of a part of the RSK to Croatia'. The witness remained in detention in Glina for 110 days before he was released. The investigation was never concluded.

At the end of today's hearing, Hadzic's counsel Zoran Zivanovic began cross-examining the witness. Veljko Dzakula is expected to complete his evidence by Tuesday, 23 October 2012.