Goran Hadzic's former friend Borivoje Savic claimed in the cross-examination that the Serbian State Security Service wanted to kill him in 1991 because he, Savic, was 'non-aggressive and peaceful'. At the same time, the witness made no effort to hide the fact that he worked with Brana Crncevic and Radmilo Bogdanovic, that he was involved in the volunteer admissions in Sid, that he carried Scorpion submachine guns and was in touch with the paramilitaries from the Dusan Silni unit 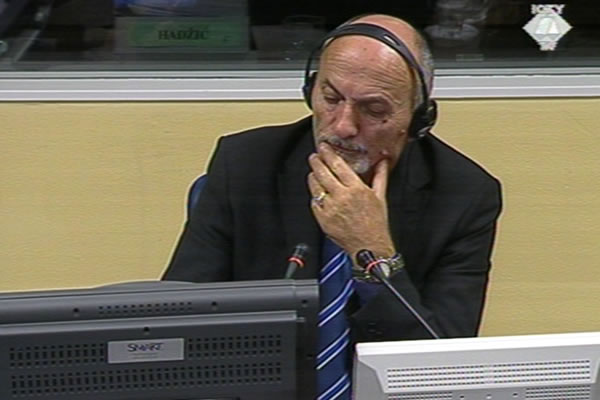 During the six hours of his cross-examination, prosecution witness Borivoje Savic gave long-winded answers that ranged far and wide from the topic, in a bid to retain his credibility and convince the Trial Chamber that he spoke the truth both yesterday in his examination-in chief and in his statement to the OTP investigators. Goran Hadzic's defense counsel contested vigorously Savic's story depicting Savic as a 'peacemaker'. As Savic explained, Hadzic was loyal to Slobodan Milosevic and was responsible for the outbreak of the war in Eastern Slavonia, where crimes were committed against non-Serbs from 1991 to 1993, as alleged in the indictment.

As the witness recounted, in 1991 he belonged to a group of Serbs from Croatia who wanted to find a solution for the crisis within 'the legal framework'. The other, more radical wing, to which the accused belonged, according to the witness, saw the solution in ‘ammunition, the larger, the better'. The witness claimed that the Serbian State Security Service controlled the Serbs in Croatia. Because he was 'non-aggressive and peaceful ' the witness was on the state security's kill list. This is why he fled from Eastern Slavonia to Serbia.

Although the witness believes the Service wanted to kill him, he didn't hide the fact that at the time he worked with Brana Crncevic to help the refugees and that he was on good terms with Radmilo Bogdanovic, a high-ranking Serbian police official. Since Savic insisted on 'peace activism', defense counsel Zoran Zivanovic showed a series of documents which prove that in 1991 the witness was issued two Scorpion submachine guns, that he was involved in the volunteer admissions in Sid - the volunteers were dispatched to the Vukovar battlefield, and that as a member of the Territorial Defense Staff in Lovas he had contacts with the paramilitaries from the Dusan Silni unit. Hadzic is charged with the crimes committed against Croat civilians in Lovas.

The witness replied that he spent just 20 days in Lovas in the fall of 1991; during that time members of the Dusan Silni unit did nothing bad. The witness didn't deny the fact that he was involved in the volunteer admissions in Sid, adding that he wanted the Scorpion guns because he feared for his personal safety. Savic repeated several times that he was 'not paranoid' and that his 'instincts told’ him somebody wanted to kill him. The witness went as far as to claim that on 31 March 1991, when he and Hadzic were arrested in Plitvice he was in fact the target of the Croatian police. Savic claimed that the Croatian side didn't like his pacifism; the claim made the accused laugh.

Savic has already testified before the Tribunal at the trial of former chiefs of the Serbian State Security Service, Stanisic and Simatovic. At that trial, the witness said that on 15 May 1991 he met Radmilo Bogdanovic and opposed the idea to send 'a thief and a criminal' Zeljko Raznatovic Arkan to Eastern Slavonia on behalf of the Serbian MUP. At the time, Hadzic worked with Arkan. The witness also claimed that he had met with Arkan the next day and 'gave him a piece of my mind'. Today, Hadzic's defense counsel put it to the witness that he never met Raznatovic because Raznatovic was in a prison in Croatia at the time. The witness replied that “the meeting may have happened at a different time’ but it did happen.

Savic completed his evidence today and a protected prosecution witness is expected to testify tomorrow.