PARTIES RESTED THEIR CASES AT THE TRIAL OF RS POLICE OFFICIALS

After the evidence of the former deputy to the RS interior minister Tomislav Kovac, the parties rested their cases at the trial of RS police officials for crimes against Croats and Muslims in 20 BH municipalities in 1992. The trial lasted more than two years, and the court heard 147 witnesses in its course 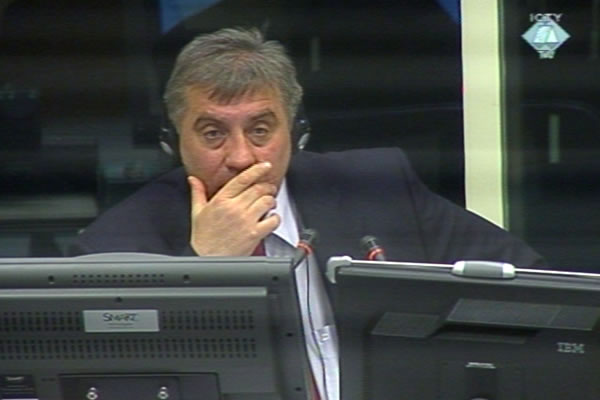 Tomislav Kovac, witness at the Stanisic and Zupljanin trial

In the two previous days of his evidence, Tomislav Kovac, former deputy to the RS interior minister, tried hard to avoid giving direct answers to the questions of the judges and the prosecutor. Today, he gave clear and precise answers to Mico Stanisic’s defense counsel. Stanisic, the first RS interior minister, and Stojan Zupljanin, former chief of the Banja Luka region police, are on trial for the crimes against Croats and Muslims throughout BH in 1992.

Kovac, who was called by the Trial Chamber, agreed with the defense’s claims that Mico Stanisic in 1992 tried to create a police force ‘in line with the law’, to fight all sorts of crimes and punish the perpetrators. Stanisic wanted to have professional and politically independent people, with ‘human and moral integrity’, the witness contended. In his effort to establish such a police force, Stanisic ‘burned out’ and was dismissed when he lost political support. The witness also corroborated the defense’s argument that the local authorities wielded more influence over the police than the MUP headquarters.

To illustrate the strong support of the population and the politicians to the local police kingpins, the defense counsel used the case of Malko Koroman, chief of the public security station in Pale. In April 1992, Koroman ‘gathered 3,000 armed men’ to prevent his sacking. The witness confirmed that he had heard about the case.

Defense lawyer Slobodan Zecevic briefly addressed a remark made by the prosecutor yesterday that it ‘wasn’t exactly the best course of action’ to remove Simo Drljaca from the post of the police chief in Prijedor only to appoint him as the deputy to the chief of the Banja Luka Security Services Center. Drljaca’s crimes were to be investigated and he should have been prosecuted, the prosecutor argued. Today, the witness said that finding posts for the personnel with strong political backing was what the ‘art of governance’ in the MUP was all about. Such people were ‘left out in the cold’: they were appointed to ‘posts that sounded important but did not carry any real weight’. In the case of Simo Drljaca, this was a ‘rational measure’ because it made it possible for a problematic person to be removed from an environment in which he enjoyed support, the defense counsel argued. In Drljaca’s absence, it was possible to conduct an investigation and collect evidence with a view to his criminal prosecution. The witness agreed with the defense counsel’s claims entirely.

The defense counsel and the witness also agreed that Mico Stanisic’s efforts to create a police force that would operate in line with the law were reversed during his successors’ term of office: interior ministers Ratko Adzic and Ziko Rakic ‘rehabilitated’ the people Stanisic had sacked.

In the brief cross-examination by Stojan Zupljanin’s defense counsel, Kovac said that Zupljanin didn’t have the political power to control the local police stations. As Kovac noted, the fact that after the war the Banja Luka Security Services Center became a ‘huge structure’ comprising no less than 26 police stations was a major problem.

Both parties have now rested their cases at the trial of Stanisic and Zupljanin. In the 349 court days since September 2009, the court heard a total of 147 witnesses. The prosecution called 127 witnesses, Stanisic’s defense called seven and the defense of Stojan Zupljanin called 10 witnesses. The Trial Chamber called a total of three witnesses. Closing arguments will be scheduled in due course.