LIMITED RESPONSIBILITY OF THE ARMY

Although a state of war was not declared in Republika Srpska in 1992, retired VRS general Slavko Lisica ‘considered there was a war going on’. This is why everybody, including the police, had to obey his orders ‘without demur’. The prosecutor tried to prove that military commanders had ‘limited’ responsibility 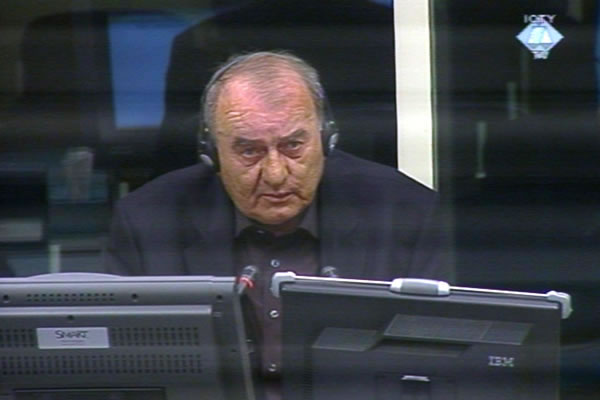 In the cross-examination of retired general Slavko Lisica, prosecutor Korner put it to the witness that he ‘wanted’ to keep everything in his area of responsibility to be under the military command, but in reality ‘it wasn’t so’. In 1992, Lisica commanded the 3rd Tactical Group in the VRS 1st Krajina Corps.

According to the prosecutor, there was no state of war in 1992 in the Serbian Republic of Bosnia and Herzegovina and the responsibilities of military commanders, including Lisica, were ‘limited’. Lisica didn’t have control over ‘everyone and everything’, contrary to what he claimed to the judges. Lisica explained that once a state of war was declared, this provided a ‘legal foundation’ for all the resources in an area to be used to support combat. This is why he wanted the legal framework to be set up. This is what ‘Karadzic and the Supreme Command’ could do, but this was not done, Lisica said. ‘In practice’ he considered there was ‘a war going on’, and everyone had to obey his orders ‘without demur’.

The prosecutor noted that there were two chains of command in the field – the police and military. As a commander, Lisica had to formulate his orders as requests because the state of war had not been declared. The witness against insisted that ‘in my area of responsibility everything was done as if there had been the state of war’. The police probably had to report to ‘the interior minister in a non-existent state’, Lisica added. The minister, Lisica was convinced, ‘probably would have to say to his men, do as the colonel says’.

In his statement to the investigators, Lisica claimed that the police was responsible for the crimes committed by police officers, adding that it was impossible to commit a crime in combat. ‘Those who kill civilians had better kill themselves, or I would do that for them’, Lisica said then. In the cross-examination Lisica confirmed that police officers, even if they were subordinated to the army, remained police officers, but they were ‘in a trench, under a beech tree, not in the village’. Lisica also noted that in a war, military courts tried those who committed crimes; as there were no such courts, then commanders served as ‘military judges’.

Replying to Mico Stanisic’s defense lawyer, the witness confirmed that the commander of the 1st Krajina Corps had legal authority when he ordered that ‘in combat operations, all police forces must be placed under the command of the zone commander, who then decides use’. The witness also confirmed that he ‘alone’ could order a public security station chief or even a security center chief to subordinate to him some police officers.

In the brief cross-examination, Stojan Zupljanin’s defense counsel put it to the witness that under the law, ‘the armed forces are in a state of war from the moment when war is declared, or from the moment when an armed attack begins’. The armed attack ‘occurred in 1991 when the conflict broke out in Croatia’, the defense counsel said. The prosecutor noted this was a new line of defense and she sought permission to call an additional expert witness to testify on the issue.

The third and the last witness of the Trial Chamber, Tomislav Kovac, is scheduled to give evidence on 7 and 8 March 2012. In 1992, Kovac served as the deputy to Mico Stanisic. Stanisic, former interior minister, is on trial with Stojan Zupljanin, former chief of the Banja Luka region police, for crimes against Croats and Muslims in 20 municipalities in Bosnia and Herzegovina in 1992.