PERISIC SENTENCED TO 27 YEARS FOR CRIMES IN BH AND CROATIA

By a majority vote, the Trial Chamber found the former chief of the VJ General Staff Momcilo Perisic guilty of aiding and abetting crimes against humanity and war crimes in Sarajevo and Srebrenica and of failure to punish those who ordered the rocket attacks on Zagreb 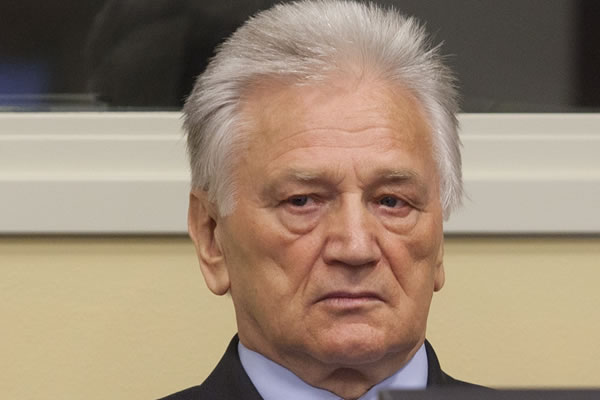 Momcilo Perisic, former chief of the VJ General Staff, was found guilty of aiding and abetting murder, inhumane acts, attacks on civilians and persecution in Sarajevo and Srebrenica and of failure to punish his subordinates responsible for the rocket attacks on Zagreb in May 1995. This is the first judgment in which the ICTY convicted an official of the Federal Republic of Yugoslavia of crimes in the war in BH. Former JNA officers Mile Mrksic, Veselin Sljivancanin, Pavle Strugar and Miodrag Jokic have been convicted by the ICTY of crimes in Croatia (Vukovar and Dubrovnik).

The Trial Chamber with judges Bakone Moloto, Michele Picard and Pedro David first found that all the crimes listed in the indictment against General Perisic had indeed been committed. From September 1992 to November 1995, the judges concluded, the VRS conducted a campaign of shelling and sniping in which hundreds of civilians were killed and thousands were injured. After the VRS forces overran the protected area of Srebrenica in July 1995, the soldiers forcibly transferred the civilians from the enclave and massacred thousands of Muslim men. Finally, the judges concluded that the Serbian Army of Krajina (SVK) launched rockets on Zagreb on 2 and 3 May 1995, killing seven persons and injuring about two hundred people. General Perisic was indicted for providing logistical and personnel support to the Serb armies in Bosnia and Croatia and thus significantly ‘aiding and abetting’ the crimes. Perisic was also charged with failing to prevent his subordinate officers in the VRS and SVK from committing crimes and failing to punish them.

The judgment goes on to say that the VJ ‘under supervision’ of General Perisic provided ‘large-scale logistic support in ammunition, fuel and spare parts’ and necessary expert assistance. According to an estimate of the Main Staff from 1994, the VRS received about 25 million bullets and over 7,500 shells from the VJ to wage the war in BH. Logistic support to the VRS, the judgment noted, became ‘centralized and coordinated’ when Perisic became chief of the VJ General Staff in August 1993. According to the judges, the FRY Supreme Defense Council authorized Perisic to provide supplies to the VRS and the SVK. Perisic also regularly urged the Supreme Defense Council members, including the Serbian president Slobodan Milosevic and Yugoslav president Zoran Lilic, to continue providing logistic support.

The summary of the indictment noted that numerous VJ officers ‘fought under the banners’ of the VRS and the SVK. In order to regulate their status, Momcilo Perisic proposed to create the 30th and 40th Personnel Centers. The ‘real purpose was kept secret’ to avoid the condemnation of the international community.

The judges dissented on General Perisic’s responsibility for the actual crimes. The majority of the Trial Chamber, with Judge Moloto dissenting, concluded that the crimes were ‘intrinsically linked with the strategy and goals of the VRS’ that ‘regularly made no distinction between civilian and military targets’. Although the majority concluded that Perisic was ‘not charged with helping the VRS wage war per se’, the two judges found that “under the VRS’s strategy, there was no clear distinction between military warfare against Bosnian Muslim troops and attacks against Muslim civilians”. The majority concluded that the aim of the siege of Sarajevo and the shelling and sniping campaign was to divide the city, intimidate civilians, break down their spirit and destabilize BH. The VRS wanted to eliminate the border on the Drina river by wiping out the enclaves in that area and by ‘perpetrating large-scale atrocities’, the majority in the Trial Chamber found. In implementing those goals, the VRS depended on the logistic and personnel support provided by the VJ and general Perisic.

The majority in the Trial Chamber also concluded that long before the tragedy in Srebrenica Perisic knew that the VRS was prone to attacking civilians and that ‘it is likely to go on with persecutions’ after the fall of the enclave. The Trial Chamber ruled unanimously that the prosecution failed to prove beyond reasonable doubt that Perisic ‘could foresee that the VRS would engage in the radical extermination of thousands of Muslims’. Accordingly the judges acquitted Perisic on the count in the indictment charging him with extermination.

The judges unanimously found Perisic not guilty as a superior for failing to prevent crimes and punish perpetrators of the crimes in Sarajevo and Srebrenica. The Trial Chamber ruled that Perisic did not have effective control over Mladic and other VRS officers involved in the crimes. According to the Trial Chamber, the evidence proved Perisic’s inability to impose binding orders on Mladic’. On the other hand, the majority in the Trial Chamber concluded that Perisic had effective control over the SVK commanders because he issued orders to them and initiated disciplinary proceedings against them; therefore Perisic was responsible for the failure to punish those who launched the rockets on Zagreb.

Perisic was sentenced by a majority vote of the judges in the Trial Chamber to 27 years in prison for the crimes he was convicted of. The long period over which the VRS committed the crimes and the vulnerability of victims were taken as aggravating circumstances. The 1,078 days Perisic has already spent in the Tribunal’s detention will be deducted from his sentence.