BELGRADE’S CONTRIBUTION TO WAR IN BOSNIA AND HERZEGOVINA

At the trial of Momcilo Perisic, the prosecution used the minutes from the Yugoslav Supreme Defense Council meetings to prove that the VJ provided not only personnel to the Serb armies in Bosnia and Krajina, but also ‘large quantities of arms, ammunition, materials and other logistical support necessary for the commission of crimes’ in Sarajevo, Srebrenica and Zagreb. The relevant minutes of the Supreme Defense Council meetings can be accessed here 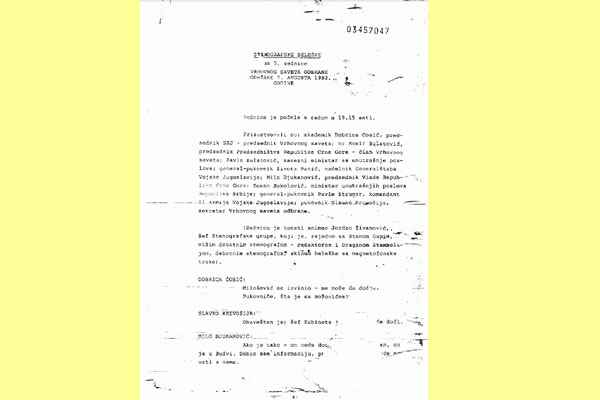 The minutes of the Supreme Defense Council meetings admitted into evidence at the trial of General Momcilo Perisic have recently been made public. The minutes of the 6th meeting of the Supreme Defense Council of 9 December 1992 show that the Serbian president Slobodan Milosevic argued, ‘we should figure out how we can help them regarding the most necessary things and what assets, technical equipment etc. they need’. The recipients of aid were clearly the Serb armies in Krajina and Bosnia that fought in the wars in which ‘Serbia didn’t participate’.

Two months later, on 10 February 1993, General Zivota Panic, who was the Chief of the VJ General Staff at the time, reported to the Supreme Defense Council that the VJ ‘gave complete equipment to form one corps’ to the Serbian Army of Krajina (SVK). Panic also said that ‘there have been great demands for the infantry ammunition’, but the ‘biggest problem is with purchase of artillery ammunition and tank ammunition’.

Apart from the Serbian president Milosevic and Chief of the VJ General Staff Panic, the Supreme Defense Council comprised Yugoslav president Dobrica Cosic and Montenegrin president Momir Bulatovic. In June 1993, Zoran Lilic replaced Cosic and General Perisic was appointed Chief of the General Staff in August 1993.According to the prosecution, Perisic continued to provide ‘large quantities of weapons, ammunition, materials and other logistical support necessary for the commission of crimes’. The prosecutor contended that the assistance was ‘substantial and significant’ and was given "irrespective of whether or not it was to be used in lawful combat operations or in the comission of crimes".

According to the prosecution, the minutes of the 19th meeting, held on 16 March 1994, corroborate the allegation in the indictment that Perisic ‘personally proposed’ to set up an air defense system for the VRS which would be integrated into the FRY system. Perisic said: ‘Last time we discussed the possibility of giving them one of the KUB units used for the [anti-aircraft] protection. Since the whole commotion is over, if we are discreet and keep it a secret, we could transport one vehicle at a time. We would take all necessary measures of precaution so that no one finds out.’

Perisic insisted that the logistical support to the Bosnian and Krajina Serb armies should be kept secret at the 27th meeting of the Supreme Defense Council on 27 September 1994. Perisic suggested that the SVK should be given ‘four boats to establish their own inland navy fleet’. At the same meeting, Momir Bulatovic told the Supreme Defense Council that Ratko Mladic had requested ‘ammunition for 76mm mountain cannons and 76mm pack howitzers’. According to Bulatovic, Mladic ‘is still the most reasonable option and alternative in Republika Srpska’.

The logistical support to the VRS and the SVK continued in 1995 during the time when Belgrade and Pale officially severed their ties and when the FRY leadership was displeased with the defeat of the Krajina Serb army in Western Slavonia. At the 37th meeting of the Supreme Defense Council on 13 June 1995, Perisic discussed the military and political situation in the region. Perisic asked permission to ‘as has been the case so far, […] offer certain help to the Republika Srpska and the Republic of Serbian Krajina, primarily in spare parts’. Perisic also advocated ‘creat[ing] conditions for a single army, here I refer primarily to the Republic of Serbian Krajina in particular because our influence in Republika Srpska is small’.

On the eve of the VRS attack on Srebrenica, at the 38th meeting of the Supreme Defense Council on 27 June 1995, FRY president Zoran Lilic relayed various requests from Republika Srpska for assistance; they asked for equipment for the special police brigades, for the purchase of Motorola radio handsets and for copies of technical documentation needed to produce ammunition. According to FRY defense minister Pavle Bulatovic, Republika Srpska asked for 300 rifles and 3,000 shells. Since the relations with Republika Srpska were frozen at the time, Momir Bulatovic and Zoran Lilic reminded the Supreme Defense Council that ‘for these issues we have already made decisions and I think that there is no reason to change them’.

The Supreme Defense Council met on 14 August 1995, immediately after Operation Storm and the fall of Krajina. Perisic’s deputy Blagoje Kovacevic proposed on behalf of the General Staff a reorganization of ‘the Army of the Serbian Krajina focusing on the preparations and engagement in guerilla war in the lost territories of the Republic of Serbian Krajina’. The purpose of this activity, Kovacevic said, was to inflict losses and to ‘giv[e] clear notice to the international community that this is Serbian land and that people from these areas do not accept the policy of accomplished fact’. Slobodan Milosevic opposed the idea, saying it was ‘idiotic’ to help the RSK after they had decided to leave Krajina, causing an exodus of the people ‘when they had all conditions provided for the defense’. ‘This was supposed to be the reason for Yugoslavia to rush to that area and defend those territories which they left running away as fast as they could?!’ Milosevic asked.

At the 44th meeting of the Supreme Defense Council on 12 September 1995, the FRY president Zoran Lilic, disappointed with the collapse of the SVK, commented on Milan Martic’s request for Belgrade’s continued support to the Krajina Serb army: ‘According to their request, we should form a new Personnel Center, invest new means, new equipment’. This statement could be the final confirmation that the personnel, assets and equipment from Belgrade had on previous occasions found their way to the Serb armies in Bosnia and Krajina.