In an interview for the 499th edition of TV Tribunal, a TV program produced by SENSE Agency, Dutch Judge Alphons Orie speaks about his career in law, his experience as a defense lawyer and a judge of the ICTY and his other great passion, music. The program is due to air by various TV channels in the region. Here are some of the highlights, including his views of the reactions to his judgments 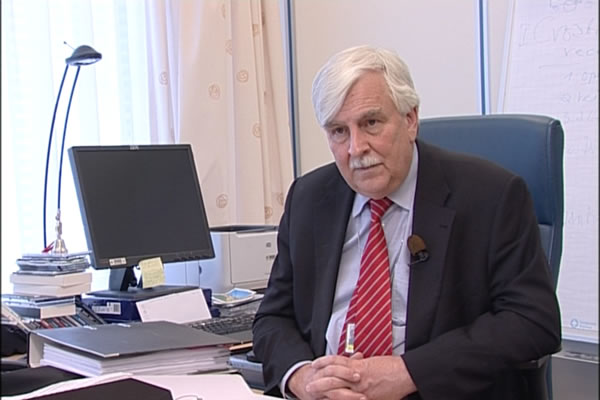 Alphons Orie, judge in the Tribunal

Dutch judge Alphons Orie has sat in nine trial chambers, in some as the presiding judge, which have handed down judgments to persons charged with war crimes in the former Yugoslavia. Some of the judgments, primarily that in the case of Croatian generals Gotovina and Markac, engendered furious reactions in the public, but also among the politicians and leaders in the countries from which the accused hail.

In an interview for the 499th edition of TV Tribunal, produced by SENSE Agency, the Dutch judge says he is "of course aware of those reactions’, as he follows the media reports. As he said, ‘I see that [people] are either happy or unhappy with the outcome’. As he stressed, the reactions come ‘after the judgment, when my task is over’. Once the Trial Chamber has handed down its judgment, only the judges in the Appeals Chamber are entitled to examine the findings. ‘Sometimes they say we did it wrong but it doesn’t influence me anymore because I don’t have to decide on those cases’, says Judge Orie.

Judge Orie, who has practiced criminal law for the most of his career, highlighted another important issue: victims. They are unhappy when the accused is acquitted, because they feel acquittals are unjust, but they are unhappy when the accused are convicted, when they consider that the sentences are not harsh enough. On the other hand, the accused are convinced that they should be acquitted. Yet, as Judge Orie remarked, the same applies to national courts. The Dutch judge took part in the first trial before the Tribunal in 1996: not as a judge but as a member of Dusko Tadic’s defense team. Tadic was convicted of crimes in the camps of Omarska and Keraterm in Prijedor.

As Judge Orie noted, the reactions to the ICTY’s judgments are in most cases exaggerated, in comparison to the judgments handed down by national courts. The government usually do not react strongly to the judgments, although there have been such cases. Even in the Netherlands, politicians will comment on the court judgments, the Dutch judge said, sounding the warning about such interference; the politicians should exercise caution. ‘I can’t change it and that’s how it is and that’s how it always has been in criminal law’, Judge Alphons Orie concluded.

The interview with Alphons Orie is accessible at SENSE Agency website.