The defense of the former Banja Luka police chief claims that the inter-ethnic tensions in Kotor Varos were engendered by the murder and mutilation of Serb special police officers. The prosecution expert contends their deaths may have ‘added fuel to the fire’ in an atmosphere of growing tensions, caused by the Serb operations in which several municipalities had been taken over 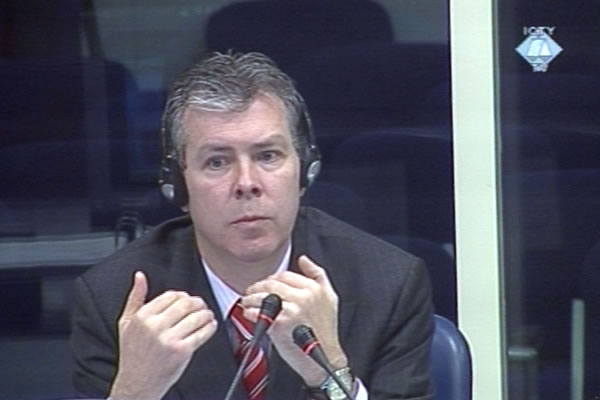 After two weeks, British officer Ewan Brown completed his evidence. Brown was asked for the prosecution to draft a report on the operation of the VRS 1st Krajina Corps in 1992. At the trial of Bosnian Serb police officials Mico Stanisic and Stojan Zupljanin, the prosecution is trying to prove that the army and the police worked together in the effort to implement the joint criminal enterprise aimed at expelling Croats and Muslims from the territory that was to become part of a single Serb state.

The defense lawyer representing Stojan Zupljanin, former chief of the Security Services Center in Banja Luka, put it to the witness that he had misinterpreted the minutes from a meeting of the Crisis Staff in Kotor Varos. The minutes state that ‘the inter-ethnic tensions have risen following the massacre of the personnel from the special police detachment of the Banja Luka Security Services Center’. In his report the witness claims there was a grammatical error in the minutes and that in fact this is a reference to an incident in which a group of prisoners were massacred by the Banja Luka special police in the yard of the local health center.

The defense showed reports from the Banja Luka TV on the burial of seven members of the special unit. They were killed in combat. The victims’ mutilated bodies were returned a few days after their deaths. The witness agreed he was ‘willing to change’ the parts of his report where he gives his interpretation of the minutes from the Crisis Staff meeting as to the identity of the victims. He noted nevertheless that he remained adamant that the death of the police officers ‘may have added fuel to the fire’ in an atmosphere of growing tensions, caused by the Serb operations in which a number of municipalities had been taken over.

Although the witness is not an expert for the Bosnian Muslim armed forces, the defense counsel repeatedly asked him to analyze the combat strength of the ‘enemy forces’, but the judges disallowed the question. ‘I don’t claim there were no armed formations’, the witness replied but the VRS documents mainly speak about ‘armed individuals, groups and gangs’. Lawyer Dragan Krgovic then presented the information about losses suffered by the Serb forces, noting that the large number of soldiers killed in action indicated the other warring factions were well armed and equipped. The witness reminded him that the Serbs suffered the most casualties in the operations launched to create corridors, particularly in the northeast, where the Serbs fought the Croatian forces who were getting support from the neighboring Croatia. In the municipalities in the west, the casualties were lower.

In the re-examination, prosecutor Joanna Korner returned to the issue of re-subordination, since the defense lawyer representing the former interior minister Mico Stanisic claimed that in combat the army had complete control over the police. The witness repeated that in the military documents he used as a basis for his analysis there wasn’t a single order issued by the army assigning a specific task to a specific police unit. All the documents merely noted that it was necessary to cooperate with the police in combat.

The trial of Stanisic and Zupljanin continues next week. The prosecution is expected to call its last few witnesses.