In his statement to the OTP investigators, retired JNA colonel Milorad Vojinovic described how he passed by the hangar at the Ovcara farm moments before two hundred Croats were executed there. Vojinovic saw volunteers wearing Chetnik insignia cursing, beating and robbing the prisoners. Vojislav Seselj is charged with the Ovcara massacre 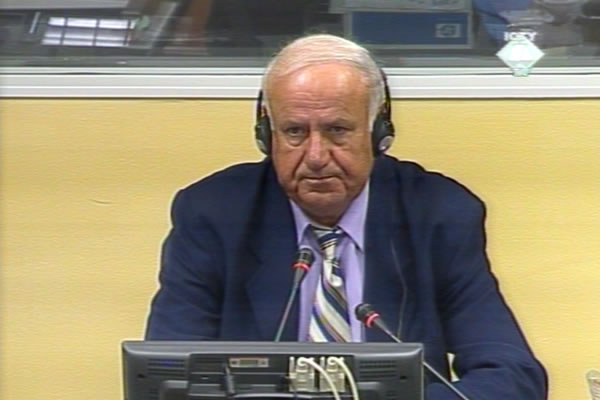 Milorad Vojinovic, witness in the Vojislav Seselj trial
Retired colonel Milorad Vojinovic was the commander of the JNA 80th Motorized Brigade in November 1991 when 200 Croats taken from the Vukovar Hospital were massacred at the Ovcara farm. Later, in December 1991, Vojinovic was appointed commander of the town of Vukovar. In the statement he gave the OTP investigators in September 2008, he said what he knew about the SRS volunteers’ participation in the events in Vukovar. Vojinovic already testified at the trial of the Vukovar Three and at the trial for the Ovcara massacre in Belgrade.

As the prosecution stated in the summary of Vojnovic’s statement, he passed by the hangar at Ovcara moments before the killing of more than 200 Croats on 20 November 1991. There he witnessed a 'shocking scene': prisoners from the Vukovar Hospital had to run a gauntlet of the Territorial Defense troops and the volunteers. In the presence of JNA personnel, they shouted abuse at the prisoners, beating them and taking away their valuables. The witness allegedly tried to protect the prisoners but people with Chetnik insignia and other volunteers prevented him. As he was in a hurry to get to a meeting of his military command, the witness proceeded towards the village of Negoslavci. There, the witness contends, he recounted everything he saw to Colonel Mile Mrksic, commander of the Operational Zone South. Mrksic told him 'not to talk about that anymore'.

When he returned to his command post, the witness learned that the army had withdrawn from the hangar as 'it had been decided' to hand the prisoners over to the Territorial Defense and volunteers. Vojinovic doesn't remember if he saw Milan Lancuzanin a/k/a Kameni, commander of the SRS volunteer unit Leva Supoderica, but he claims he heard later that Lancuzanin was there. The witness knew that Seselj gave Kameni the rank of a vojvoda, Chetnik war leader.

Seselj refused to cross-examine the witness because his testimony was tendered into evidence in the form of a written statement. Vojinovic was then questioned by the members of the Trial Chamber. He confirmed that he was one of the highest-ranking officers at Ovcara, in reply to a question by Judge Harhoff. 'I did as much as I could to protect those men, my command and myself', he said, adding 'everything I saw at Ovcara happened under the control and command of the JNA officers.'

[IMAGE]3746[/IMAGE]When Vojinovic completed his evidence, the prosecution called Julka Maretic from the village of Vocin in Western Slavonia. In her statement to the OTP investigators she described the arrival of 'Seselj's and Arkan's men' in that village in October 1991. After their arrival, the witness said, four Croats employed by local Serbs went missing and three of her neighbors were killed. Julka Maretic left Vocin in December 1991. Next year she came back only to find her 'house destroyed and roof with no tiles'. The roof was destroyed when a nearby Catholic church was blown up.

The Vojislav Seselj trial continues next week with the evidence of Davor Strinovic, forensic medicine expert. As an observer of the Office of the Croatian Government for Detainees and Missing Persons he oversaw the exhumation at Ovcara.