What is the meaning and the import of the judgment delivered by the International Court of Justice in the Bosnia-Herzegovina vs. Serbia and Montenegro case? Serbia continuously breaches the Genocide Convention. Did the outcome of the 14-year long legal suit come too early for Bosnia Herzegovina? 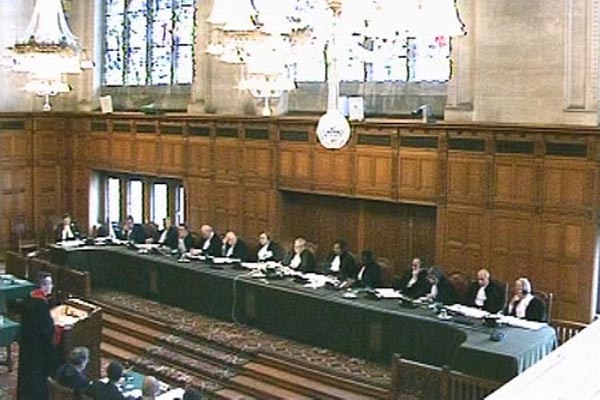 Courtroom of the ICJ
The judgment delivered by the International Court of Justice on Monday, 26 February, in the Bosnia Herzegovina VS. Montenegro case is the harshest judgment against a state in the 60 years of the existence of the Court, the highest UN court settling disputes between countries.

Bosnia Herzegovina first filed a suit against the Federal Republic of Yugoslavia, then against Serbia and Montenegro, and finally against Serbia alone. The issue was the application of the convention whose full title reads the Convention on the Prevention and Punishment of the Crime of Genocide. Prevention and punishment of genocide lie at the core of this convention, adopted in December 1948 and ratified by 140 countries to date. The Convention was motivated by the desire to prevent the World War Two holocaust from happening ever again.

In the judgment of the International Court of Justice, Serbia was found guilty on both grounds. Serbia failed to do anything to prevent the crime of genocide in Srebrenica and failed to punish the accused by surrendering them to the ICTY. It was also found guilty of continually breaching the Genocide Convention – since 1995 – because of its refusal to surrender to the Tribunal persons indicted for genocide, first and foremost Ratko Mladic. From 26 February on, every day Mladic and other fugitives from international justice remain at large is yet another day of Serbia being in breach of the Convention. And thus day after day, the ICJ judgment remains unenforced, in the face of the Security Council, which is in charge of enforcing ICJ’s decisions.

The judgment of the world’s highest court is founded primarily on the factual and legal findings contained the final judgments of the Tribunal. In one important case, the ICJ went even further. The ICTY Appeals Chamber found General Radislav Krstic guilty of aiding and abetting genocide and identified "Bosnian Serb forces" as perpetrators of genocide in Srebrenica. The International Court of Justice identified the perpetrators even more precisely:. genocide was committed by the Republika Srpska Army, under the command of its Main Staff, which did posses the specific “genocidal intent”.

In one point, particularly important for the evaluation of any role Serbia may have had in the Srebrenica massacre, the International Court of Justice veered away from the factual and legal findings of the ICTY Appeals Chamber in the Dusko Tadic case. In the judgment delivered in July 1999, the Appeals Chamber found that the VRS was "under overall control" of Belgrade and the Yugoslav Army, which meant that they had funded, equipped and assisted in coordination and planning of military operations. Had the International Court of Justice accepted this finding of the Tribunal, Serbia would have been found guilty of complicity in the Srebrenica genocide. Instead it concluded that the Appeals Chamber in the Tadic case "did not attempt to determine the responsibility of a state but individual criminal responsibility:, and that “Serbia’s leaders were not involved” in the appellate proceedings.

Paradoxical as it may be, the outcome of this legal suit filed back in March 1993 arrived too early for Bosnia Herzegovina. Three trials of former Serbian officials have yet to start before the Tribunal. The trials of Momcilo Perisic, one-time Chief of the VJ General Staff, Jovica Stanisic and Franko Simatovic, heads of the secret police, and Vojislav Seselj, leader of the Serbian Radicals and Chetniks should shed light on the role the VJ, Serbian police, paramilitary and volunteer units played in the war in BH.

In light of the judgment delivered by the International Court of Justice, the Perisic case is of particular interest. His indictment reveals several unknown details related to the role the VJ played in the VRS Srebrenica operation. It is alleged that the VJ officers from the Uzice Corps took part in the planning and preparation of the attack on the safe haven. Furthermore, it is alleged that on 13 July 1995 Perisic issued a command to 30 VJ officers ordering them to report to the VRS Main Staff and take up their duties in BH, including the Srebrenica area. Similarly, in 1994 and 1995, the VJ allegedly organized clandestine training for the 10th Sabotage Detachment, whose members participated in a number of executions in the Srebrenica area. Perisic is blamed for ordering the border blockade between Serbia and Bosnia, thus preventing the Muslims from Srebrenica to escape Mladic's forces and cross the Drina into Serbia.

If Momcilo Perisic's judgement confirms these allegations, they would represent "a missing link" the International Court of Justice could not find when it determined Serbia's responsibility for the Srebrenica genocide.