SERBIA FOUND GUILTY OF FAILURE TO PREVENT AND PUNISH GENOCIDE

The judgment delivered by the International Court of Justice today confirmed that the Bosnian Serb forces committed the genocide in Srebrenica in July 1995. Serbia, in the first place, failed to prevent it, and afterwards failed to punish the perpetrators – first and foremost Ratko Mladic - and surrender them to the Tribunal. BH’s claim for reparation was dismissed by the ICJ 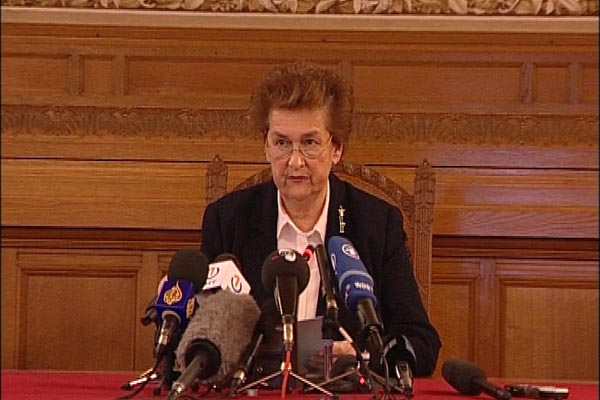 Rosalyn Higgins, president of the International Court of Justice in The Hague
The International Court of Justice today found Serbia guilty of failure to prevent genocide in Srebrenica and to punish and surrender the perpetrators- first and foremost Ratko Mladic – to the Tribunal. Serbia was ordered to immediately take effective steps to punish those who committed genocide and to surrender those charged with genocide and other crimes to The Tribunal, in line with the obligations it has in accordance under the Genocide Convention.

Serbia’s violations of its obligations stem not only from the Convention on the Prevention and Punishment of the Crime of Genocide but also from two "provisional protective measures" issued by the International Court of Justice in April and September 1993. The then Federal Republic of Yugoslavia was ordered explicitly "to do everything in its power to prevent the crimes of genocide and to make sure that such crimes are not committed by military or paramilitary formations…operating under its control or with its support." The judges of the world’s highest court concluded that despite this explicit order, Serbia did nothing in July 1995 to prevent the Srebrenica massacre, although it “should normally have been aware, of the serious danger that acts of genocide would be committed”.

The judgment put an end to the legal suit Bosnia Herzegovina filed 14 years ago against the Federal Republic of Yugoslavia – later to become Serbia and Montenegro, and finally only Serbia. The world's highest court concluded that the crimes, such as mass killing, rapes, detention, destruction or deportations, committed during the 1992 -1995 war, are "acts of genocide" according to the Convention, but could not be qualified as genocide. The Court found that it had not been proven that those crimes had been committed with a specific intent "to destroy as such" the protected group of Bosnian Muslims in part or as a whole.

ICJ President Rosalyn Higgins noted that there is a lot of evidence to prove that crimes against humanity and war crimes had been committed in Bosnia-Herzegovina. The International Court of Justice does not have jurisdiction over them, because this case deals "exclusively with genocide in a limited legal sense and not in the broader sense sometimes given to this term ".

The intent to commit genocide, the judges of the International Court of Justice found, has been proven beyond reasonable doubt only in the case of the Srebrenica massacre in July 1995. It has been qualified as genocide in judgments delivered by the ICTY. While it confirmed that the Bosnian Serb forces had committed genocide in Srebrenica, the highest world court did not find that this crime could be attributed to the then Federal Republic of Yugoslavia. The court concluded that the direct perpetrators of genocide, regardless of the assistance and support they received from Belgrade, could not be regarded as its "bodies or agents". Serbia's involvement in the conspiracy to commit genocide and its participation in genocide has not been proven, the Court found.

The International Court of Justice rejected BH’s demand for reparations, noting that financial compensation was not the most appropriate form of compensation for the breach of the obligation to prevent and punish the crime of genocide.

The Court also rejected Belgrade's objection that it lacked jurisdiction, making it clear that today's judgment refers only to Serbia's responsibility and not to Montenegro’s, because last year Montenegro left the state union. Unlike Serbia, it chose to terminate its continuity under international law.

After the judgment was delivered. Belgrade’s legal representatives pointed to the parts of the judgment where, as they termed it, Serbia was “acquitted of the gravest accusation in its history: the commission of genocide, complicity in it or instigation to it”. According to them, Serbia “still has the obligation to face those who besmirched the name of the Serbian people by committing these heinous crimes" and has to ensure that they are surrendered to the ICTY.

Ambassador Radoslav Stojanovic, Belgrade's agent, first gave a brief statement in Serbian expressing his "professional satisfaction" as the Court accepted "our argument that no one could prove that the Serbian people had the intent to destroy the Muslim people". Speaking in French afterwards, he expressed his "regret for of all the Muslim, Croatian and Serbian victims in Bosnia Herzegovina".

The BH representatives admitted that they “did not get everything we wanted" but stressed, "we got quite a lot". First of all, it was confirmed that the Bosnian Serb forces had committed a number of grave crimes tantamount to "acts of genocide". With the exception of Srebrenica, they could not be qualified as genocide because of the difficulties involved in proving the existence of “genocidal intent”.

Sakib Softic, BH agent, emphasized the fact that both parties "should accept the judgment in its entirety, and not only in parts favorable to them”. In his view, after the highest world court found that Republika Srpska forces had committed genocide in Srebrenica, it was necessary "to do something to reverse its consequences". Softic announced that BH would address the Security Council if Serbia, following the judgment, still refused to surrender Mladic and other fugitives from the international justice. The Security Council is in charge of the enforcement of the judgments delivered by the International Court of Justice, the highest judicial body in the UN organization.