Former Norwegian foreign affairs minister tells the court what he heard and saw on the Albanian border several days after NATO launched the Kosovo campaign. Knut Vollebaek’s claim that the Serb forces "marked" Albanian refugees with different-colors armbands according to the route they were to follow provoked the defense counsel to object and resulted in a brief adjournment 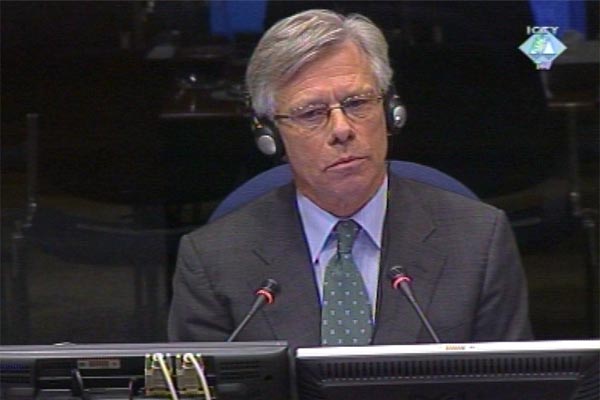 Knut Vollebaek, witness at the Slobodan Milosevic trial
"I have never seen so many tractors in my life, there were thousands of them, moving in mile long columns, said Norwegian diplomat Knut Vollebaek today at the trial of the Kosovo Six, describing the movement of Kosovo refugees towards the Albanian border several days after the NATO intervention. He was at the border as the head of OSCE mission visiting the Kosovo Verification Mission monitors. After leaving Kosovo, they were helping the international humanitarian organizations to take care of the refugees.

Vollebaek listened to Albanian refugees’ stories about how the army and the police removed the license plates from their vehicles and took away their identity papers before they crossed the border. He claims he was told at the border that the expulsion was well organized. This was borne out by the fact that the Serbian forces ordered the refugees to wear armbands in different colors on their arm. At the check points they were directed to particular routes depending on the color of the ribbon they wore.

Vollebaek's statement caused a debate in the courtroom. The defense claimed they had not heard this allegation before. None of the Albanian eyewitnesses has ever mentioned wearing any armbands. After a long debate, the Trial Chamber allowed the prosecution to continue that line of questioning, having determined that one of the witnesses had mentioned the cloth the refugees had to wear on their arms. However, instead of continuing to question the witness about the armbands, he announced that he had no further questions.

Today Vollebaek didn't have a chance to talk in detail about his meetings with the Serbian politicians he described in July 2002 at the trial of Slobodan Milosevic. At a meeting in the beginning of March 1999, Milosevic told him that the Albanians driving in columns on their tractors had been going on a "picnic", and not into exile. The smoke seen from the Albanian villages was not from burning houses but from the hay the KLA had set on fire, Milosevic went on to say.

The witness said he had met Milosevic several times in the course of 1998 and in early 1999. Two of the accused, Milan Milutinovic, Serbian president at the time, and Nikola Sainovic, deputy prime minister in charge of Kosovo, attended some of the meetings. Vollebaek claims Milutinovic would agree with Milosevic in those talks, adding that "it was clear from the look on his face what he thinks of the presence and views” of the OSCE representatives.

A protected witness is scheduled to start testimony at the Kosovo trial tomorrow. As indicated by the prosecution, witness K-79 will talk about the cooperation between the army and the Interior Ministry in Kosovo, the activities of the Special Units of the Police and the role played by Sreten Lukic, the accused police general, in the war in Kosovo. It has not yet been confirmed whether he will actually appear in court. The defense counsel for the Kosovo Six have objected to his testimony because in their view, the witness did not speak about the crimes alleged in the indictment in his statement given to the OTP. The Chamber will rule on the objection by tomorrow morning.