DEFENCE AND PROSECUTION: MOMIR NIKOLIC'S SENTENCE IS "INCONSISTENT AND UNJUST"

In the hearing on the appeal lodged by Momir Nikolic, sentenced to 27 years in prison after his guilty plea to crimes in Srebrenica, the defense and prosecution join forces, supporting each other's arguments in favor of reducing the sentence 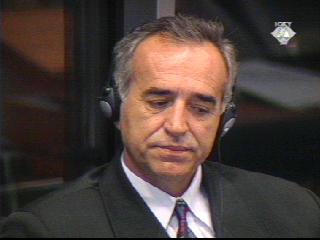 Momir Nikolic in the courtroom
Noting that the sentence to 27 years in prison imposed by the Trial Chamber on Momir Nikolic was "inconsistent and unjust" the defense and prosecution joined forces today at the hearing before the Appeals Chamber.

Both the defense and the prosecution consider that the first-instance judgment failed to take into account Nikolic's admission of guilt, the remorse he showed on that occasion, and in particular his full cooperation with the prosecution on determining the truth about the events in Srebrenica in July 1995. Both the defense and the prosecution, furthermore, consider that the Trial Chamber failed to give appropriate weight to the fact that Nikolic was the first VRS officer to find the courage and admit publicly what had happened in July 1995 in Srebrenica and to assume his responsibility for the crimes. Nikolic and his family are paying a huge price, his defense counsel Rock Tansey said today. His family was forced to leave Bosnia and he has been labeled a traitor.

Both the defense counsel Tansey and prosecutor Peter Kremer insisted today in particular on the "inexplicable disparity" between Nikolic's sentence and the sentences imposed on other participants in the Srebrenica massacre. Former chief of staff of the Zvornik Brigade, Dragan Obrenovic, was sentenced to ten years less than Nikolic, although he had played a more important role in the Srebrenica operation and had assumed responsibility for the execution of 3,000 persons, as the prosecutor noted today. A former commander of the Bratunac Brigade, who pleaded not guilty and was found guilty of aiding and abetting of genocide by the Trial Chamber was subsequently sentenced by the same Chamber to 18 years in prison, nine less than Nikolic.

In the opinion of both the defense and the prosecution, the Trial Chamber did not give sufficient weight to Nikolic's full cooperation with the prosecution. It is the only mitigating circumstance explicitly listed in the Rules of Procedure and Evidence. According to defense counsel Tansey, "there is a need to encourage the accused to plead guilty and to cooperate, and to do so, it is necessary to reduce the sentences substantially." Prosecutor Peter McCloskey said that Nikolic's admission of guilt and cooperation were "of huge importance for the Srebrenica case and for the people in Bosnia."

At the end of the 90-minute appellate hearing, the accused Nikolic addressed the Chamber. He reiterated his "sincere remorse and regret" for the crimes in Srebrenica, adding that he was "especially saddened by the fact that some of his students had been killed there, yet [he] was unable to protect them". He also said that he never did anything on his own initiative in Srebrenica but was just following orders, adding that he did not "command, plan, organize or order the crimes, or kill and abuse anyone". Nikolic concluded his brief address to the Appeals Chamber by expressing his readiness to testify at the forthcoming trials for the Srebrenica genocide, if called to do so by the court.

Concluding the hearing, Judge Fausto Pocar did not indicate when the judgment of the Appeals Chamber could be expected.