Dr. Juraj Njavro claims the accused Major Sljivancanin was in command of the soldiers and Territorial Defense troops who came to the Vukovar hospital. He identified Captain Radic as the man who made the selection of the wounded and the sick 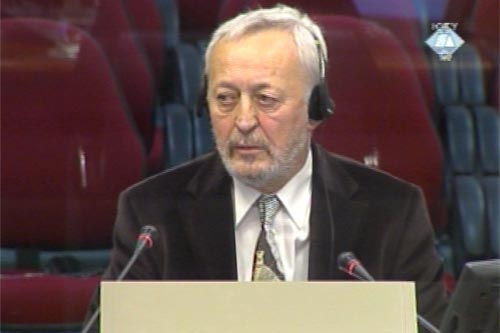 Radic came to the hospital on 18 November 1991 at around 1 p.m., Dr. Njavro testified. He was escorted by Bogdan Kuzmic, a former receptionist in the hospital, also a member of the Territorial Defense and he "inspected" the hospital. Radic and Kuzmic saw all the wounded and the civilians, in order, as the witness claims, to "identify those who will best taken out on 20 November and end up at Ovcara".

When Radic left the hospital at around 5 p.m., the witness went to see some of the wounded and the sick. They complained that Captain Radic and Bogdan Kuzmic "abused them psychologically", calling them "Ustashas and butchers", threatening they would be killed. The witness said the patients had suffered physical pain, too, because Captain Radic "touched those parts of their bodies which hurt the most because of their injuries".

Dr. Juraj Njavro had his first contact with the accused captain the next day, on 19 November, at around 8 a.m. Radic gave him his rank and full name, telling the doctor that he was "under arrest as of this moment" and that he "must not leave the room" where he was guarded by a JNA soldier. When the doctor protested against the torture the wounded and the sick were subjected to, Radic told him "this is done on the orders and permission of the commander, Major Sljivancanin".

Sljivancanin himself confirmed that he was the sole person in charge of the hospital, the witness claims, adding that the accused said for the first time he was the commander on 18 November 1991, in the conversation with Nicholas Borsinger, representative of the International Red Cross. He said it the second time at the meeting of the medical staff on 20 November. "The hospital is under my command", he said on that occasion. At around 9 p.m., the improvised waiting room in the basement, that used to be full of the wounded and the sick, was almost completely empty. Dr. Njavro tried to find out what had happened with the wounded and where they had been taken. His colleague from the Military Medical Academy, Dr. Marko Ivezic, said he could not answer that question, that everything was "happening on the orders of Major Sljivancanin".

The indictment charges Sljivancanin and Radic of having "commanded the Serb forces responsible of the abuse and killing of non-Serbs evacuated from the Vukovar hospital to the Ovcara farm" and of having "personally participated in their evacuation and selection" knowing they would be imprisoned and then persecuted and killed.