MOSTAR CROATS DID NOT FIGHT "FOR A FOREIGN AGGRESSOR POWER"

During the appellate hearing, the defense of Vinko Martinovic Stela denies that the accused and the members of the HVO units he commanded in Mostar "were aware of the fact they were participating in an international conflict on the side of a foreign aggressor power" – Croatia 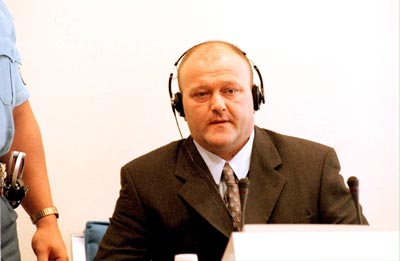 Vinko Martinovic Stela in the courtroom
The conflict between Croats and Bosniaks in the Mostar area in 1993 was "a local and defensive one, not a international conflict" for Vinko Martinovic Stela and members of the HVO units he commanded, defense counsel Zelimir Par said today, as he presented the appeal against the judgment finding his client guilty of grave breaches of the Geneva Conventions and sentencing him to 18 years in prison. In order for crimes to be qualified as grave breaches of the Geneva Conventions, the prosecution must prove the existence of an international armed conflict.

Par is not challenging the finding made by the Trial Chamber that the conflict between the Croats and Bosniaks in Herzegovina was an international one because of Croatia's involvement. He is challenging the claim that Martinovic and his fellow fighters ""were aware of the fact they were participating in an international conflict on the side of a foreign aggressor power" – Croatia. If the accused have no "awareness and intent regarding a crucial element of a criminal offence" – in this case, the existence of an international conflict - then, according to the defense councel, there can be no responsibility for grave breaches of the Geneva Conventions.

Addressing the issue of punishment, Par noted the "unjust disparity" between the severe sentence imposed on his client and some other sentences the Tribunal has handed down. The Trial Chamber, in his view, "did not sufficiently take into account the mitigating circumstances" including what Par described as "voluntary surrender". When the indictment against Martinovic was issued, he was in prison in Croatia and he sought to be transferred to the Tribunal. The second mitigating circumstance that was not taken into account, according to the defense counsel, is the assistance he gave the detained Muslims and his neighbors. On the other hand, Par contends, the Trial Chamber erred when it took the command role of the accused as an aggravating circumstance.

The appellate hearing will continue.