The first referral hearing was held today at the Tribunal. The prosecutor, who applied for the referral of the Ademi/Norac case to Croatia, expressed certain concerns, primarily about the weight that the Croatian courts would give to the principle of command responsibility 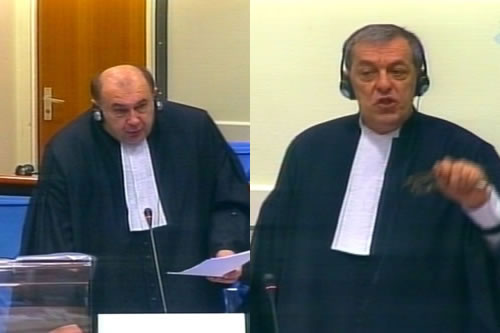 Olujic and Prodanovic, defense attorneys for Norac and Ademi
If the Ademi/Norac case is referred to the Croatian courts, problems might arise concerning the adjustment of the Croatian legislation to the Tribunal practice, but such problems are not insurmountable – all parties in the case agreed today, as they presented their arguments whether the trial for the crimes against Serb civilians in the Medak pocket should be held in Croatia. The hearing was held before a special Chamber of the Tribunal.

The case against the two generals of the Croatian Army, Rahim Ademi and Mirko Norac, is the first in which the OTP has asked for the referral to domestic courts in accordance with the UN strategy to complete all first-instance proceedings before the Tribunal by the end of 2008. This was the first hearing on this subject ever held before the ICTY. The prosecutors, the defense teams, representatives of the Croatian government and the amici curiae all stated that they were in favor of referring the case as that would speed up the work of the Tribunal and contribute to the development of international law as well as the rule of law in the countries whose courts would try the referred cases.

Prosecutor Kenneth Scott did, despite his application for referral, state that he had “certain concerns.” The key concern is the fact that the Croatian law from 1993 – which may be applied in this case – does not envisage sanctions on the basis of “command responsibility”, which is given great importance by the OTP.

According to the defense, the amici curiae and the Croatian government, this problem can be resolved. The prosecutor proposes that the domestic court apply the provisions of international law that define command responsibility, which has been supported by the other participants in the debate, who added that the solutions could also be found within the Croatian legislation, “if it is applied in a creative way.”

The prosecutor reminded everyone that the trial in Croatia, if granted, would “be carefully monitored from the start” and that the prosecution would seek that it be returned to the Tribunal if it deemed it to be conducted in an inappropriate manner. The prosecutor also proposed that the tribunal should intervene if the state that took on a case does not receive legal assistance from other states – access to witnesses or documents, for instance. The judges indicated that they had certain doubts as to what jurisdiction, if any, they would have over a case once it is referred to the domestic courts.

The hearing continued in the afternoon with the proposals from the Registry as to how to transfer the voluminous evidentiary and other materials from the Tribunal to the domestic courts. 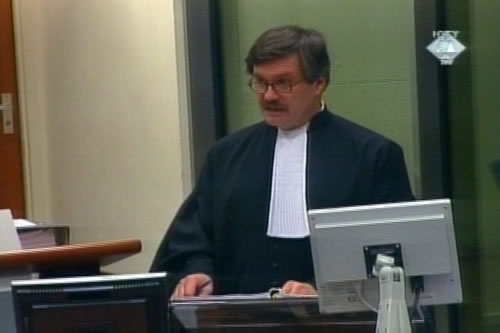