The decision to be announced on the appeal of the accused against the 23-year sentence. The appeal lodged after the Trial Chamber departed from the joint recommendation of the prosecution and defense. Families of victims can come to Nikolic to seek information about their kin 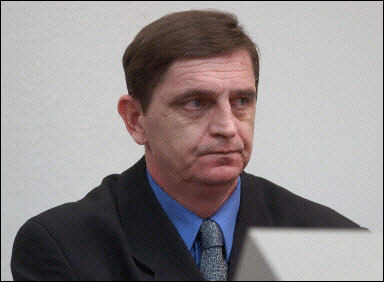 Dragan Nikolic - Jenki in the courtroom
The Appeals Chamber will render its judgment in the case of Dragan Nikolic in the afternoon on Friday, 4 February, it was announced today at the Tribunal.

Dragan Nikolic a/k/a Jenki was the commander of the Susica camp near Vlasenica, in Eastern Bosnia, from June to September 1992. He was the first person to be indicted by the Tribunal in The Hague. He was arrested and then transferred to The Hague in April 2000. In September 2003 he pleaded guilty to 9 murders and 4 cases of torture, aiding and abetting rapes and participation in the persecution of the non-Serb population in Vlasenica area.

In the plea agreement, the prosecution and the defence recommended that the accused be given a sentence of 15 to 20 years in prison, but the Trial Chamber departed from the recommendation sentencing Nikolic to 23 years in prison. The first-instance judgment was delivered on 18 December 2003.

The defense filed an appeal which was practically supported by the prosecution. Both parties consider that the Trial Chamber has erred by departing from the joint recommendation for the sentence.

At a hearing in the appellate proceedings last November Nikolic said that despite the sentence imposed on him he “never for a moment regretted the decision to plead guilty”. Inviting the other accused to plead guilty and thus “contribute to reconciliation”, Nikolic noted that “facing the truth is painful and bitter”, but according to him “it is the only way for the future” offering “a way out of the maze of denial.” He invited the families of victims to come to him “without fear or hesitation” if they feel that he might help them with information, because he was “unreservedly ready” to do so, as he said.

In the past two months, several families of victims have come to Nikolic with questions about the fate of their kin. Some have done so through this agency.