WAY OUT OF THE MAZE OF DENIAL

At the appellate hearing, Dragan Nikolic Jenki called upon other accused to follow his lead and admit their responsibility if they had committed any crimes 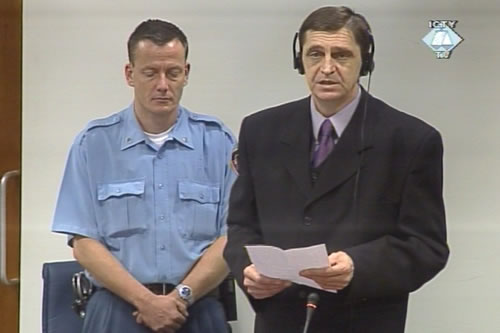 Dragan Nikolic - Jenki in the courtroom
“I have never, not for a moment, regretted my decision to plead guilty,” said Dragan Nikolic Jenki at the end of today’s appellate hearing. A year ago, he was sentenced to 23 years in prison after pleading guilty to the crimes committed in the Susica camp in 1992.

Nikolic called upon other accused to do the same because thus they will “make the biggest contribution towards reconciliation.” “Facing the truth is painful and bitter,” Nikolic described his own experience, but said that it was the only way “that offers prospects for the future” and “a way out from the maze of denial.” He also called upon the victims’ families to talk to him “without any fear or hesitation” if they felt that he might help them by providing information. He is, as he said, “unreservedly ready” to do so.

Nikolic addressed the Appeals Chamber, with ICTY president Theodor Meron as the presiding judge, after the defense presented its arguments for the appeal against the Trial Chamber judgment sentencing Nikolic to 23 years in prison. The prosecution practically supported the defense appeal.

The prosecution considers that the Trial Chamber “did not get a comprehensive insight into the facts, such as it would have had if a trial had been held.” Both the prosecution and the defense, as prosecutor Mark McKeon explained, “have found themselves in a unique position - they are able to evaluate the facts because they know more about them that the Trial Chamber.” That is why the judges, in his opinion, should honor the proposal made in the plea agreement, “particularly because it was a joint proposal”, i.e. it expressed the views both of the defense and of the prosecution on that issue.

Dragan Nikolic a/k/a Jenki was the commander of the Susica camp near Vlasenica from June to September 1992. In November 1994, his name was on the first indictment issued by the Tribunal. He was arrested and transferred to The Hague in April 2000. In September 2003, he pleaded guilty to 9 murders and 4 cases of torture, aiding and abetting in rapes and participation in the persecution of non-Serb population in that part of Eastern Bosnia. The first-instance judgment was delivered on 18 December 2003.