The Chamber finds that the prosecution has presented enough evidence to prove that all the crimes described in the six counts of the Dubrovnik indictment were indeed committed, but has failed to prove beyond reasonable doubt that General Pavle Strugar is individually responsible for the attack on the Old Town of Dubrovnik on 6 December 1991 and the consequences of that attack 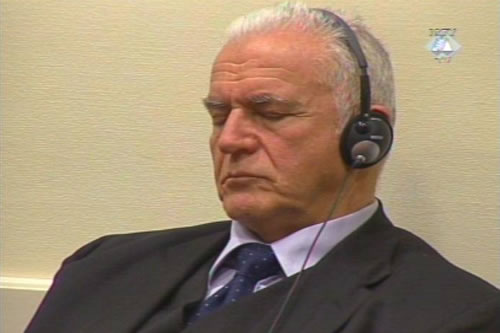 Pavle Strugar in the courtroom
General Pavle Strugar, former commander of the 2nd Operational Group and the commander of the JNA Dubrovnik operation in late 1991 was sentenced today to eight years in prison. In the judgment read out by the presiding judge Kevin Parker, the Trial Chamber has found General Strugar guilty of the attacks on civilians and the destruction or willful damage done to institutions dedicated to religion, education, the arts and sciences and historic monuments – two of the six counts in the indictment. He has been convicted on the basis of command responsibility, for failing to prevent forces subordinate to him from committing those crimes and for failing to punish them.

The Chamber finds that the prosecution has presented enough evidence to prove that all the crimes described in the six counts of the Dubrovnik indictment have been committed – murder, cruel treatment, attacks on civilians, devastation not justified by military necessity, unlawful attacks on civilian objects and destruction of religious, cultural and historic monuments. The evidence, however, does not show that General Strugar ordered the attack on the Old Town of Dubrovnik on 6 December 1991, the consequences of which were the crimes listed in the indictment. The Chamber therefore concludes that individual responsibility of the accused for the attack and its consequences has not been proven.

The Chamber concludes that “on 6 December 1991, Dubrovnik was shelled extensively, deliberately and unselectively”, but that neither General Strugar nor his subordinate Admiral Miodrag Jokic, commander of the 9th Naval District, issued the order to attack the Old Town. After pleading guilty to the attack on Dubrovnik before the Tribunal, Admiral Jokic was sentenced to seven years in prison. As the Chamber concludes, the shelling of Dubrovnik was the consequence of an attack launched by the JNA units on Mount Srdj, the only feature of strategic importance above Dubrovnik that had not yet been captured.

The Chamber believes that the attack on Srdj was not an arbitrary and impulsive decision of Captain Vladimir Kovacevic, commander of the 3rd Battalion, 472nd Brigade, as the defense suggested and as the official JNA statement on the attack suggested. The Chamber concludes that the decision to attack Srdj was made in the late afternoon of 5 December 1991 at Kupari, at a meeting attended by senior officers of the 9th Naval Sector.The attack on Srdj commenced early in the morning of 6 December and was carried out by two infantry units with constant artillery support. The Chamber likewise finds that the fire was directed towards Dubrovnik and the Old Town at the moment when “the [JNA] attacking forces had approached sufficiently close to Srdj to be themselves threatened by the JNA artillery barrage.” The Chamber noted that the Town had been shelled most intensely between 9 and 11 a.m.

The Chamber confirmed that General Strugar did indeed issue an order to cease fire “sometime around 11 a.m.”, but not to all units. The cease-fire thus failed. The shelling ended at around 4 p.m. Neither General Strugar nor Admiral Jokic, the Chamber has found, “did anything to stop the attack on Srdj,” although it was clear that the Old Town of Dubrovnik came under threat during the attack.

In the opinion of the Chamber, General Strugar did not do anything after this to identify and punish the perpetrators of the unlawful shelling of the town, and is therefore guilty on the basis of command responsibility, as the superior officer of the units that took part in the attack that he failed to prevent or punish.

The 457 days General Pavle Strugar has spent in the UN Detention Unit since his voluntary surrender on 21 October 2001 will be included in the sentence.