The Appeals Chamber found General Pavle Strugar guilty on two more counts in the indictments: for devastation not justified by military necessity and unlawful attacks on civilian objects in the Old Town of Dubrovnik on 6 December 1991. It nevertheless commuted his sentence on grounds of his ill health: to seven and a half years in prison instead of the eight years imposed by the Trial Chamber 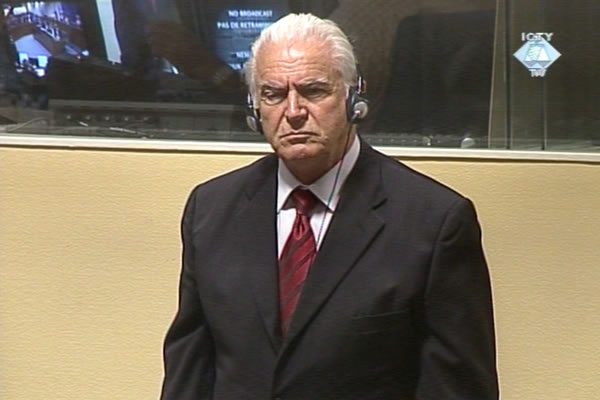 Pavle Strugar in the cortroom
The Tribunal’s Appeals Chamber dismissed all grounds in the appeal filed by Pavle Strugar, former JNA general, and convicted him on two more counts in the indictment: devastation not justified by military necessity and unlawful attack on civilian objects in the Old Town of Dubrovnik on 6 December 1991. Strugar’s sentence was nevertheless commuted to seven and a half years, six months less than the sentence he received from the Trial Chamber.

On 31 January 2005 Strugar was sentenced to eight years in prison for attacks on civilians, and destruction and deliberate damage to cultural heritage. Both sides appealed the judgment. The defense asked for Strugar's acquittal on all counts, for a retrial or for a significantly decreased sentence. The prosecution on the other hand called for a harsher sentence of 10 to 12 years because ‘the scope of Strugar’s responsibility for the prevention of the unlawful shelling of Dubrovnik was not established correctly’.

The Appeals Chamber granted this ground in the prosecution’s appeal, convicting Strugar of failure to prevent the shelling of Dubrovnik. The summary of the judgment read in the courtroom notes that the Trial Chamber erred because it did not find that in the early morning hours of 6 December 1991 Strugar ‘had reasons to know that his subordinate JNA personnel were preparing to commit crimes during the attack on Mount Srdj, above Dubrovnik.

The Appeals Chamber concluded that ‘errors in law in the proceedings before the Trial Chamber’ and the conviction on two more counts had no effect on the sentence Strugar received and the gravity of the crimes. Strugar’s health was taken as a mitigating circumstance: it has deteriorated since his conviction. His sentence was therefore commuted from eight to seven years and six months in prison.

The four years and five months Strugar spent in the UN Detention Unit will be credited as time served. If the rule of thumb – releasing the convicts after two thirds of their sentence has been