SEVEN MORE INDICTMENTS TO BE ISSUED BY THE HAGUE

In her report to the UN Security Council, Del Ponte reveals she is currently conducting seven investigations against 13 suspects. Karadzic and Mladic will prolong the existence of the Tribunal. Evaluations of the cooperation (or lack thereof) of the states and entities of the former Yugoslavia with the Tribunal. 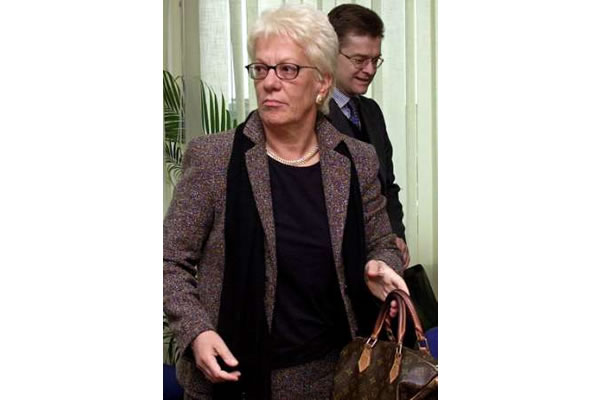 Carla del Ponte, chief prosecutor at the Tribunal
The Office of the Prosecutor of the Tribunal is conducting seven investigations against 13 people from various states and entities of the former Yugoslavia, according to Carla del Ponte's report to the UN Security Council.

If all the investigations result in indictments that are confirmed, two of the seven new indictments could be joined with other cases waiting to go to trial at the Tribunal. As for the remaining five indictments – provided that all indictees are arrested promptly – separate trials would be held; they should all be completed by the end of 2008. Any delays in the arrest or surrender of the accused, warns the Chief Prosecutor in her report, would result in an extension of the deadline.

According to Del Ponte, this is particularly so in the case of the most wanted fugitives from international justice: Radovan Karadzic, Ratko Mladic and Ante Gotovina. She says, "The Tribunal cannot be considered to have fulfilled its mandate for as long as they remain at large."

In his report submitted to the Security Council, Tribunal President Theodor Meron estimates that if Karadzic and Mladic are arrested in 2005, and if they can be tried together, their trial would last at least until the end of 2009.

In their separate reports to the Security Council, the Chief Prosecutor and the President of the Tribunal evaluate the cooperation of the states and entities of the former Yugoslavia in similar terms. According to Del Ponte, Serbia and Montenegro "has virtually suspended its cooperation with the Tribunal," while Meron states that cooperation is "virtually non-existent." Both state that there has been "a very positive development" in Croatia’s cooperation with the Tribunal, with Del Ponte adding her belief that the current government in Zagreb "is doing all it can to locate and arrest Gotovina."

In the case of Bosnia and Herzegovina, Del Ponte notes "increased activities of the Office of the High Representative and SFOR aimed at arresting the fugitives indicted by the Tribunal." Stating that the authorities of Republika Srpska "have still not shown sincere willingness to cooperate with the Tribunal," Del Ponte expresses her "grave doubts" that the arrest operation carried out by the RS police in Visegrad in April "… was truly motivated by this goal."

The UN Security Council will discuss both reports later this month.