The prosecution intends to present about 50 witnesses; 40 will give evidence before the Trial Chamber, the rest will give their statements in writing. 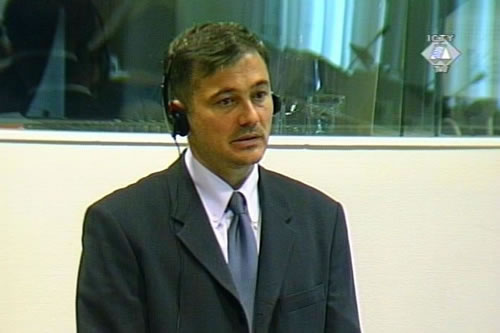 Paško Ljubicic in the courtroom
The trial of Pasko Ljubicic, former commander of the Croatian Defence Council (HVO) military police in Central Bosnia, has been tentatively scheduled to start on 1 July 2004.

The prosecution intends to present about 50 witnesses; 40 will give evidence before the Trial Chamber, the rest will give their statements in writing. Prosecutor Mark Harmon said at a status conference today that it will take prosecutors about 136 hours, or 34 working days, to present their evidence. The defence has not indicated how many witnesses it will present during its part of the trial.

Ljubicic is charged with attacks on Ahmici, Nadioci, Pirici and Santici on 16 April 1993; about 100 Bosniak civilians were killed and many were seriously wounded. He is also accused of an attack on the village of Ocehnici, carried out by military police on 19 April 1993, in which five women from the Nuhagic family were killed. The indictment also cites the destruction and plunder of Bosniak-owned property and the imprisonment of Bosniaks in the municipalities of Busovaca and Vitez.

At today’s status conference, the parties said they had no major problems in preparing their cases, and the accused himself said he was feeling well and had no problems in the Detention Unit.