DID SESELJ ‘REVISE’ OR ‘SUPPLEMENT’ HIS TESTIMONY?

The prosecution claims that Vojislav Seselj has changed his testimony in order to exonerate himself and Goran Hadzic from the accusations related to the Ovcara massacre in Vukovar on 20 November 1991. Seselj contends that he didn’t ‘revise’ his evidence: only in The Hague did he learn what had actually happened there from the witnesses and the other accused 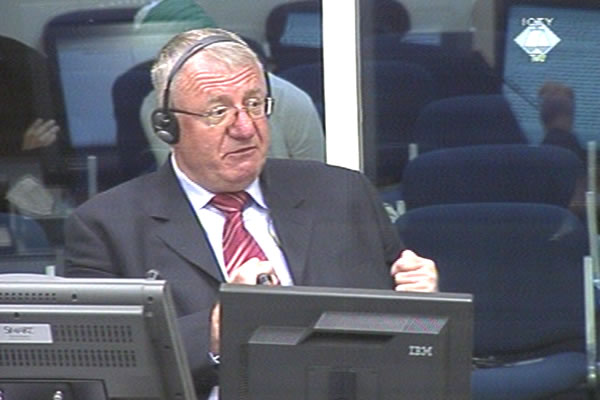 As the cross-examination of Vojislav Seselj continued, the prosecutor put it to the Serbian Radical Party leader that he had changed his evidence about the Ovcara crimes in order to meet the needs of Goran Hadzic’s defense.

In the examination-in chief Seselj, who is himself facing charges of crimes against humanity in Vojvodina, Croatia and Bosnia and Herzegovina, shifted the blame for the murder of about 200 prisoners in Ovcara on Aleksandar Vasiljevic, former chief of the JNA Security Administration, and a group of officers Vasiljevic had brought out of retirement. The Ovcara massacre is among the charges against Seselj. Now he claims that Vasiljevic and the officers set up and supervised the execution.

This is not what Seselj said in 2005 as he testified at Slobodan Milosevic’s trial. Today prosecutor Lisa Biersay read out parts of the transcript from that trial where Seselj said that the JNA troops handed the wounded and the sick from the town hospital to the civilian authorities. Seselj told her that now he had all the information, unlike in 2005. According to Seselj, he didn’t ‘revise’ his testimony to bolster his or Hadzic’s defense. Only in The Hague did he learn what had actually happened in Ovcara, Seselj explained. Veselin Sljivancanin, the Guards Brigade security chief, ‘admitted personally’ that he had brought the buses with the prisoners to the hangar in Ovcara, Seselj told the court, adding that many prosecution witnesses testified that the JNA officers were ‘in Ovcara’ all the time and ‘were tallying the lists’.

Seselj claimed that the Serbian Radical Party volunteers were under the JNA command from September 1991. The prosecutor showed Seselj’s speech from October or November 1991 in which he says his men were part of the local Territorial Defense. In another interview Seselj says the volunteers ‘are joining the locals’ units and are placing themselves under the command of village staffs’.

The prosecutor then asked Seselj about his relationship with Zeljko Raznatovic Arkan and Slobodan Milosevic. Both Arkan and Milosevic are mentioned in the indictments against Seselj and Hadzic as members of the same joint criminal enterprises. In an interview from late November 1991 Seselj maintained that his men cooperated with Arkan and the Serbian Volunteer Guard. Today Seselj added that Arkan’s men and Seselj’s men were under the command of Radovan Stojicic Badza, the Territorial Defense commander. The Territorial Defense was in turn part of the Operational Zone North. Seselj explained that initially the only thing he knew about Arkan was that he had been a bank robber, a ‘powerful man whom everybody feared’. It was only at the Tribunal that Seselj learned about the crimes Arkan had committed in Eastern Slavonia.

Seselj dismissed the prosecutor’s suggestion that the SRS received support from Milosevic from 1991 to 1993. However, Seselj confirmed that Milosevic’s regime supported the transfer of volunteers to Krajina from September 1991 on. Also, Seselj noted that before that time he ‘used all the means at his disposal to try and prevent the JNA mobilization’ because he feared that the JNA generals would remove him from his post.