Brigadier John Wilson contends that the special police in Krajina were the ‘at the root of most of the problems in the UN protected areas’. The special police was under the jurisdiction of Milan Martic but ‘worked’ for Goran Hadzic. Hadzic, Wilson claimed, saw himself as the supreme political power in Krajina 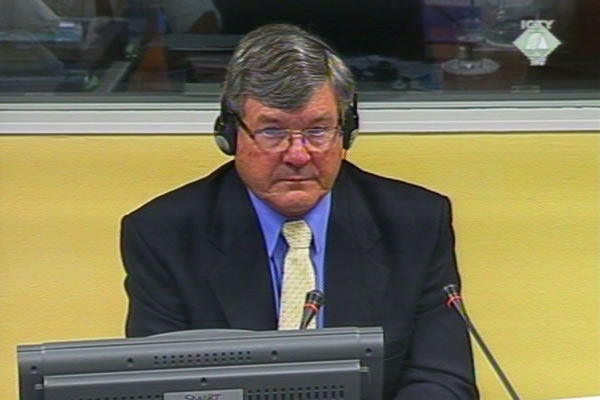 Retired Australian brigadier John Wilson continued his evidence at the trial of Goran Hadzic. Wilson claimed that the former president of the Republic of Serbian Krajina saw himself as a ‘supreme political power in Krajina’. The police was under the jurisdiction of Milan Martic but it worked for Goran Hadzic, Wilson explained.

According to the Secretary General’s report of 28 September 1992, the ‘cause’ of the deterioration in the UN protected areas from the beginning of July 1992 was the decision of the Serb political authorities in Knin to set up a new paramilitary force, comprising the Territorial Defense and the special police. The witness said that the units were not demilitarized during 1992 and 1993.

As Wilson said, the special police were ‘at the root of most of the problems in the protected areas’. They were responsible for intimidation, murder, looting, rape, destruction of property of non-Serbs and the ethnic cleansing of the parts of Croatia controlled by the Serb authorities, the witness claimed. They caused all the problems for UNPROFOR in implementing their mission, Wilson concluded. They ‘taunted, refused to cooperate or ignored military observers who were often subjected to threats and intimidation’, the witness concluded.

Wilson noted that the local authorities were regularly informed about the situation in the field but there ‘was no will’ to stop such practice. As Wilson added, there was a ‘unanimous opinion’ that the RSK leadership was preventing UNPROFOR from accomplishing its mandate. The UN peace-keepers had their freedom of movement restricted, there were border controls and the demilitarization was not completed.

At the beginning of the cross-examination, Wilson explained that special police was a general term describing all police in the field. In response to the defense counsel, Wilson said that ‘many people had access to arms’ and there were other armed formations in addition to the special police, including the armed members of the Territorial Defense, the JNA soldiers and groups from Bosnia that were fighting in Krajina.