EVIDENCE ON CRIMES IN LOVAS

Former president of Lovas municipality Zeljko Cirba described at the trial of Goran Hadzic how non-Serbs left Eastern Slavonia en masse in the fall of 1991. Cirba said that many of those who remained in their houses after the exodus became victims of crimes. Ivan Mujic was one of them: he was seriously wounded when he and a group of his compatriots were forced to walk through a mine field near Lovas 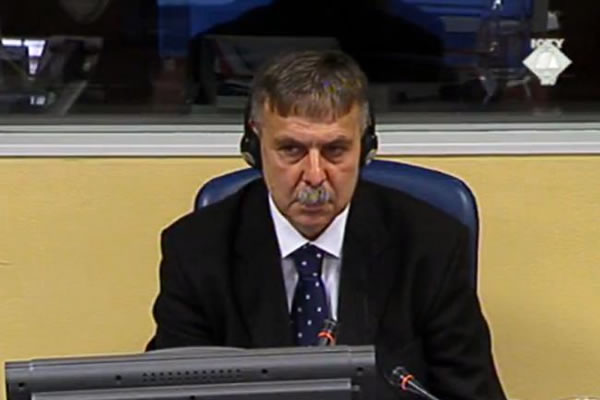 Zeljko Cirba, the Croatian Democratic Union’s official from Lovas, described today at the trial of Goran Hadzic how the first mass expulsion of Croats and other non-Serbs from Eastern Slavonia in the fall of 1991 enfolded. The accused was at the time the prime minister of the so-called Serb Autonomous Region of Slavonia, Baranja and Western Srem. The prosecution has charged Hadzic with numerous crimes against non-Serbs in that region.

As the witness said, in the first half of October 1991, the Yugoslav army shelled the villages of Sotin, Lovas, Tovarnik, Ilaca, Bapska, Sarengrad and other places in Eastern Slavonia. A number of houses were destroyed and civilians were killed by the shells. As time went by, most of the people fled to Ilok in fear for their lives. Ilok was the last town to be captured by the JNA and Serb paramilitary units. According to the witness, it ended up being a ‘mousetrap’ for about 10,000 to 15,000 civilians. On 17 October 1991, they were evacuated in a convoy to the free Croatian territory. Many of those that remained later became victims of crimes, the witness said.

After the peaceful reintegration of that area, Cirba, as the president of Lovas municipality, attended the exhumations of mass graves in the Jelas forest near Lovas, in Tovarnik and Vukovar in the summer of 1997. Today, the witness is the deputy prefect of the Vukovar-Srijem County.

The day after the refugee convoy left, one of the gravest crimes alleged in the indictment against Hadzic happened. The next prosecution witness, Ivan Mujic, testified about it. After the JNA and other Serb units arrived in the village on 10 October 1991, local non-Serbs – including the witness – were forced to do compulsory work service at the agricultural cooperative and other places. About 50 of them were taken to a minefield near Lovas and were forced to walk and thus ‘clear’ the field. When a mine exploded, the witness was severely wounded in the stomach. In a way, he was lucky because he was among a few dozen survivors. Twenty-one local Croats lost their lives. Some were killed by the mines as they blew up while some were shot by the Serb soldiers.

For some reason, Mujic testified about the incident in closed session. The only thing that could be heard in open session concerned the events before and after Mujic was wounded. He said he had been a driver before the war. As a part of the compulsory work service, Mujic was preparing the accommodation facilities for the paramilitary unit Dusan Silni. The members of the unit later took part in the incident in which captured people were forced to go into a minefield.

After the incident, the witness and other wounded people were sent by a military ambulance to the hospital in Sremska Mitrovica; this decision was obviously taken by the JNA officers who were not happy with the actions of the Serb paramilitaries. The witness underwent surgery there and was then transferred to Stari Slankamen for rehabilitation. After almost two months, the witness returned to Lovas. Just three days later, on 16 December 1991 he fled to Zagreb as he feared for his family’s safety.

In the cross-examination of the two witnesses, Hadzic’s defense lawyers didn’t deal with the key parts of their evidence. Instead they focused on the presence of the Croatian National Guard (ZNG) troops in Lovas and the involvement of local Croats in volunteer units. The witnesses said that the ZNG had stayed in the village for a very short time and had not taken part in combat. As for the villagers, they had hunting rifles and set up watches for a while, guarding the area around their houses. According to the witnesses, on 10 October 1991, on the eve of the shelling, the ZNG withdrew from Lovas and the village guards were disbanded so they couldn’t have been the reason for the attack.